City of Picayune to close all offices Tuesday, schools will also close 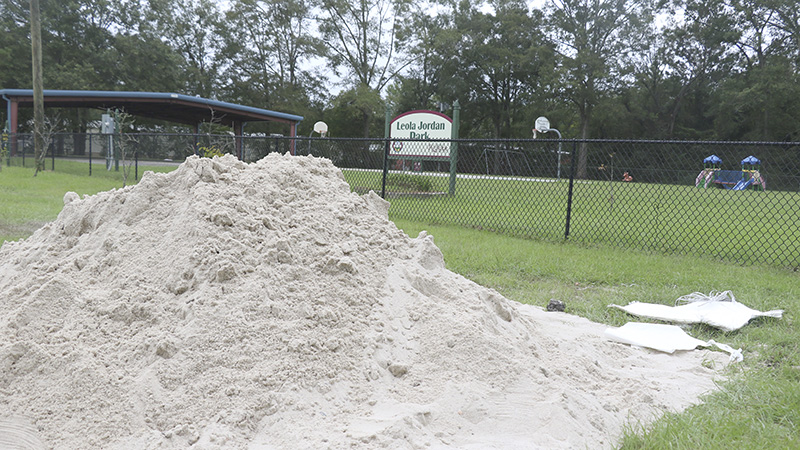 Self serve: Sand bag locations such as this at Leola Jordan Park in Picayune have been set up throughout the city of Picayune and various areas in Pearl River County. Photo by Jeremy Pittari

As Sally churns out in the Gulf of Mexico, Pearl River County residents will want to make sure they make last minute preparations.
Emergency Management Director Danny Manley said that the projected track as of Monday afternoon suggest Hurricane Sally will take a hard right, putting the weakest side toward this area.
“If this storm continues trending like it is, we may see minimal effects,” Manley said.
Picayune Fire Chief Keith Brown said that as of Monday afternoon, the storm is projected to make landfall between Gulfport and Biloxi, possibly as a category 2. With that landfall projection, that puts Pearl River County on the weaker west end of the storm and means that the initial projects of receiving 10 to 15 inches of rain has also been reduced. Brown said this area should start seeing effects from the storm as early as 2 a.m. Tuesday, and those effects should last throughout the day.
Monday, Picayune’s City Council met via teleconference to declare an emergency and discuss what is being planned to respond to the storm.
City Operations Director Harvey Miller said he met with other city administrators who came to the conclusion that City Hall and non-essential offices should be closed tomorrow.
A skeleton crew of Public Works employees will report to work on Tuesday, along with extra police officers and firefighters.
All schools within Pearl River County will be closed Tuesday, along with all county offices.
The originally planned City Council meeting will still be held Tuesday evening, though instead of meeting in person with in City Hall, the meeting will be held via teleconference.
While storm surge will not be of concern to this area, heavy winds and rain will be what is of the most concern, especially with the slow moving nature of Hurricane Sally.
Manley said in addition to the normal preparations such as clearing a yard of any debris that could become airborne, residents should also ensure they have enough fuel for vehicles and generators, bottled water, food and check for any dead trees that may be close to a house.
Some other essential supplies include medicine, cash and batteries for a radio or charger for cellphones.