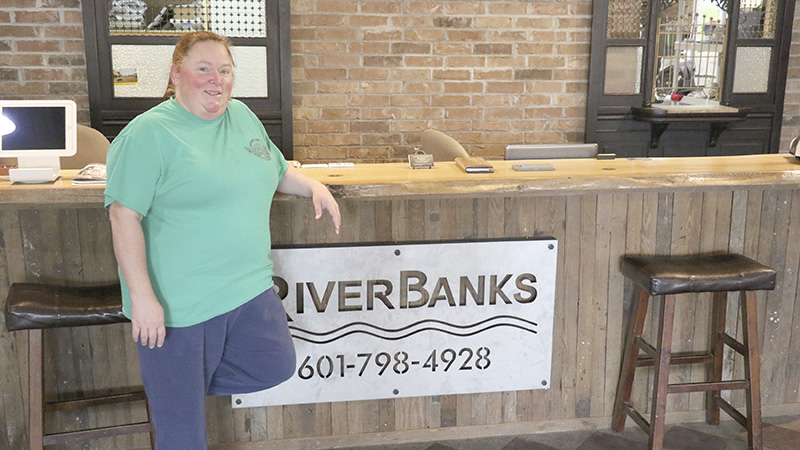 RiverBanks Trophy Shop has been operating along West Canal Street for the past two years, and has been growing ever since, prompting the business to relocate to a larger store front last year.
Last spring, the business moved two doors down from the previous location on West Canal Street.
Owner and operator Crystal Jeansonne said she and her husband are buying the new location instead of renting. In preparation for the move, which was needed to accommodate the new services being offered, some significant renovation of the new location was needed.
According to Jeansonne’s research and stories told to her by long time residents, their current location, 111 West Canal Street in Picayune, has been in the city since at least the 1920s, and in that time the structure has been home to several businesses. As history has it, a bank may have operated out of the structure in the 1920s. In the 1940s a jeweler which carried on well into the 70s, used that address to conduct business. Then in the 80s, the location was a bakery, before Earl and Mary’s Tee Shirts operated out of it starting in the early 90s. Crystal said she took ownership of the building from Earl and Mary’s.
“Earl and Mary blessed us with this one,” Jeansoone said. “We love this old building.”
Some renovation work was conducted on the structure before RiverBanks Trophy Shop officially moved in. That included gutting all of the wall paneling and ceiling tiles from the interior and renovating the front exterior in brick.
After the wall paneling and ceiling tiles were removed, the owners discovered a collection of rustic boards that suit the theme of their business. To complement those rustic walls, friends and family helped install brick columns, two large wooden beams to bring the cathedral ceiling to life and the carpet was removed to reveal the original tile flooring.
Any wood that could be repurposed was, and the countertop is made from a large piece of wood reclaimed from the Pearl River.
The Jeansonnes took ownership of the building in Feb. of 2019, and had all of that renovation work complete before the spring 2019 Street Festival, Crystal Jeansonne said.
With a larger location, now the business offers leather engraving, which her husband Kyle performs himself. Leather patches with any image the customer desires, including their own likeness, can be sewn onto hats. Or, Kyle can create an engraved leather cover for tally books used by oil rig employees.
Along with the trophies and plaques that have always been offered at RiverBanks Trophy Shop, Crystal said the business now offers custom wooden caskets or urns, and can make custom shadow boxes, all in a wood shop nearby.
In remembrance of a lost loved one, that person’s fingerprint and signature can also be engraved on small metal tags.
RiverBanks Trophy Shop is open Monday through Friday from 8 a.m. to 5p.m. and Crystal can be reached by calling 985-774-5373.