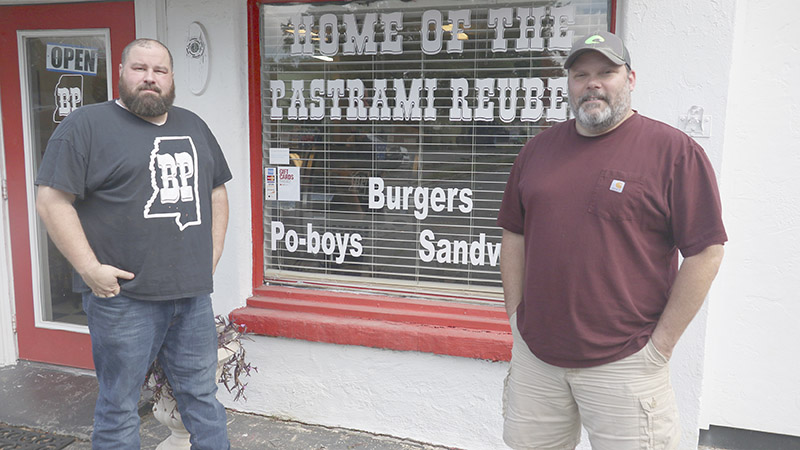 TAKE OUT: From left, Brother’s Pride owners Aaron Duracher and Jamie Boe, have been providing fresh meat and hot lunches to residents in and around Picayune for the past three years. During the COVID-19 pandemic, customers can still get their Brother’s Pride orders to go. Photo by Jeremy Pittari

What began as a local business to get their homemade meat products out to a wider clientele has become a local lunch destination in Picayune.
Brother’s Pride in Picayune began as a way for brothers by marriage to make their homemade sausage in a retail location and sell those items, among others, to the general public back in 2017. Owners and brothers-in-law Aaron Duracher and Jamie Boe have been at the helm since the doors opened.
Initially the business began as a deli that sold fresh made items such as hotdogs, sausage and fresh cuts of meat.
But these days the business focuses a lot on the restaurant side of things, while still offering fresh cuts from the case. Fridays customers may be able to order a fried catfish poboy as a special, while each weekday customers can get a freshly ground and cooked hamburger made of top sirloin. That burger is made from ball of the freshly ground beef, before it’s put on the grill and smashed to form a patty.
“It’s to keep the moisture, that’s why it doesn’t have the dense texture like a fast food burger,” Boe said.
Most of their products are purchased from the same suppliers who stock restaurants. The only hitch so far in their business has been the recent impact of the COVID-19 pandemic, which led to the closure of all dining rooms across Mississippi.
“Lately lunch business has been hard to come by,” Boe said.
“It’s hurt our business, but we’ve made up for it from the deli sales,” Duracher said.
While customers can still order a freshly made burger or other sandwich for take out for lunch, Brother’s Pride still offers fresh deli items for sale as well. Those include the freshly ground sirloin for $4.99 a pound, or customers can take home the business’ unique blend of spices called Boley Creek Sand, and house made barbecue sauce.
Bacon and pastrami is cured and smoked in house. The bacon starts with farm raised pork belly that is cured and smoked over hardwood hickory.
In the deli case are a number of lunch meat, including turkey breast that has no fillers, and an assortment of cheeses.
Boe said that’s what sets Brother’s Pride apart from other local businesses; no other business in town offers the same products.
“Our meats are higher end,” Boe said.
While Brother’s Pride currently offers pick up and curbside service, large scale delivery is an option the two are still trying to iron out.
Brother’s Pride is located at 728 West Canal Street and staff can be reached at 601-273-4088 Tuesday through Friday from 11 a.m. to 5 p.m. According to a post on the business’ Facebook page, Brother’s Pride will open an hour early Tuesday through Friday to allow senior citizens to shop first and is offering delivery of meat and deli items to senior citizens as well.