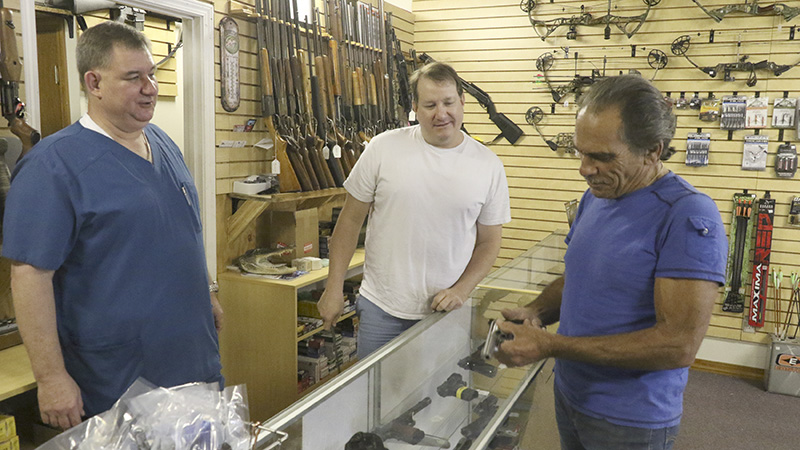 In his youth, Scotty Davis recalls days spent on his family’s property hunting and fishing until his parents called him home.

That love of the outdoors prompted him to later start his own business selling supplies for the things he loves to do. It took about two decades to save the money to start his dream, but now for the past five years he has been the owner and operator of Davis Sports and Outdoors. Recently his business moved to  a new location, but he still offers the same hunting and fishing gear to Pearl River County residents. Davis said he prides himself on being able to offer his goods at fair prices, and even offers to let people know if they are getting a good deal on firearms if they find one for sale elsewhere.

“We strive to definitely be the cheapest,” Davis said.

At the business’ new location at 1125 Highway 43 N. Suite G, Davis has been able to not only fit all of the stock he carried at the previous location, but added some new stock and services.

With a major nationwide retailer deciding not to carry ammo any longer, Davis Sports and Outdoors has stepped up to meet that need by doubling the amount of ammo for sale, at a fair price.

Other new services include gunsmithing, a website and tire sales. Davis said he can provide tires for any type of vehicle, from passenger vehicles, tractors, four wheelers and even forklifts. All the customer has to do is order the tires they need from Davis Sports and Outdoors and the tires will be available the next day.

On the website, located at  www.davissportsandoutdoors.com, customers can order and pay for the outdoor gear they want, and pick it up at his store when it arrives. Davis said he plans to add a drop ship service to the website so customers can have any item, other than a gun, delivered to their house.

In addition to archery gear, Davis also fledges arrows even if they were not purchased in his store, for a nominal fee.

Davis said he plans to add products for those who play sports to his stock in the near future.

Davis Sports and Outdoors is open Monday through Saturday from 9 a.m. to 6 p.m.