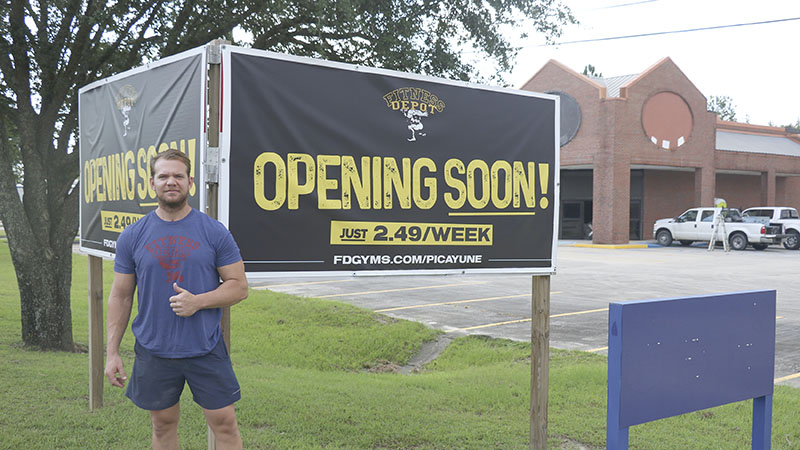 UNDER CONSTRUCTION: Fitness Depot owner Paul Kirkley poses in front of a sign at the soon to be Picayune location of Fitness Depot, which is being built inside the old Rite Aid building that has been vacant since March of last year. Photo by Jeremy Pittari

Picayune will be the home of the sixth location of Fitness Depot owned by Paul Kirkley, which is being built inside the once vacant Rite Aid building.

Owner Paul Kirkley said he built his first Fitness Depot in 2010 in Collins. As the contractor for each build, he said that he likes to be involved in the construction of each location of Fitness Depot so he can head up the design and build out. His background in the construction industry gives him insight into acting as the contractor for each build and pull his own permits. For several years, he had been looking to open a location in Picayune, so when the old Rite Aid building became available, he researched the facility and discovered it offered a lot of square footage and an abundance of parking. So far he and his crew have put in three months of work to turn the old pharmacy into a full service fitness business.

When the Picayune location is complete in late August or early September, it will offer more than 15,000 square feet of workout equipment and other amenities. Kirkley said he plans to decorate the interior like his other locations, with a fun atmosphere featuring an art deco design.

“We basically cover anything in fitness,” Kirkley said.

He said he chose Picayune as the next location of his growing business due to the demographics, so he feels his price point will be of interest to the residents.

Board approves advance of $30,000 to Gulf Coast Mental…