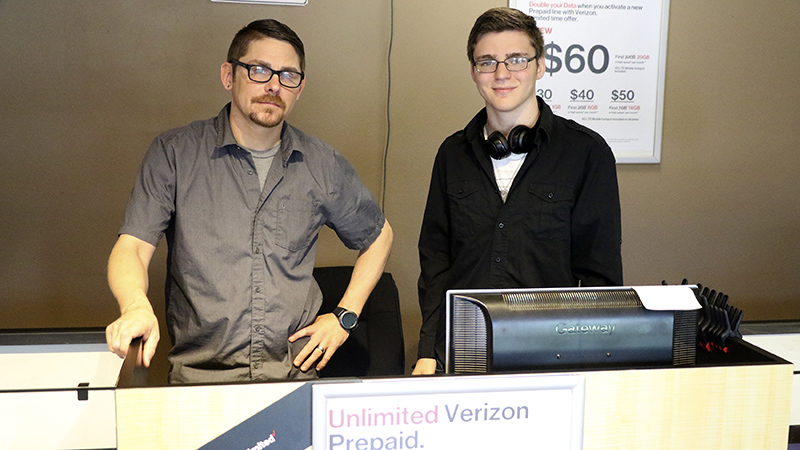 FAST AND FRIENDLY: At left, Jeff Haik, and his son Noah, offer repair services for a number of electronic devices. In some instances those repairs can be done in less than an hour. Photo by Jeremy Pittari

Pearl River County residents needing a new screen on their cellphone or other electronic device can bring it to Device Doctor in Picayune.

Owner and manager Jeff Haik said he has more than two decades of experience repairing electronic devices, five of which focused on the repair of cellphones. He can also repair laptops, desktops, smart watches, tablets and drones.

Many times, broken screens on a cellphone can be repaired the same day. In some instances that repair can be complete in less than an hour.

He said he can replace a screen on newer iPhones in about 15 minutes, and he uses premium parts that come with a lifetime warranty.

For many Samsung models, he said he can have the screen replaced in about 30 minutes, depending on the model, but don’t usually come with a lifetime warranty.

Some tablets may need an extended repair time to allow the adhesive to set.

If he can’t repair the item in house, he has an agreement with an offsite repair facility that can usually return the item in working condition within seven to 10 days.

Haik said he can also help customers with their computing needs, such as upgrading a PC or even building one to their specifications. He also offers a maintenance package for Windows based computers to ensure they stay free of malware and viruses, among other issues.

If a device is no longer charging, Haik said he can repair those issues as well.

The family business also employs his son, Noah, who is learning the trade while he decides his career path, Haik said.

Device Doctor is open Monday through Friday from 9 a.m. to 6 p.m. and by appointment on Saturdays from 10 a.m. to 2 p.m.

Device Doctor is located at 963 Memorial Boulevard in Picayune and staff can be reached by calling 769-242-2288.