The Grand, a local place to host a party 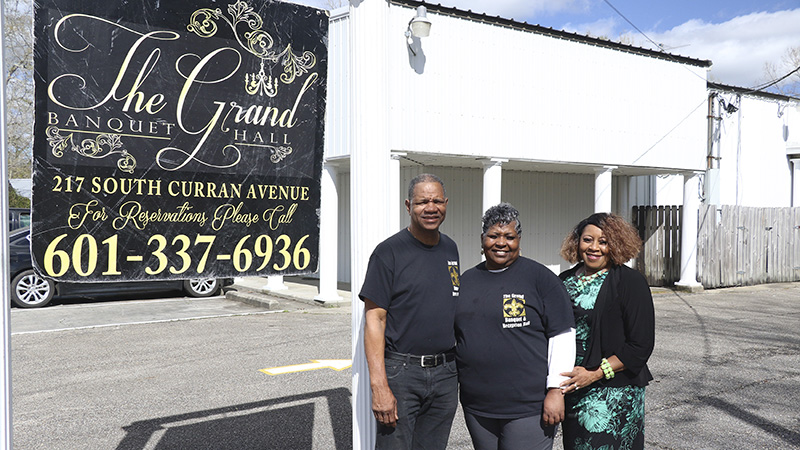 CELEBRATION VENUE: From left are Manning Jones, Judith Jones and Fran Simmons. The Jones own and operate The Grand, a place for all occasion parties. Photo by Jeremy Pittari

For the past two plus years, The Grand has provided a place for community members, organizations and groups to hold a celebration close to home.

Owner and operator Judith Jones said she decided to open the business in June of 2015 after attempting to hold an event of her own. During that planning process, she learned that there were limited options where a celebration could be held.

When she discovered the former Magnolia Commons business had closed, she made an effort to open her own business there and rename it The Grand.

Now, the location is available for weddings, anniversaries, class reunions, comedy shows or any other event a group, club or organization wants to hold.

The Grand, located at 217 S. Curran Ave., Picayune, employs about 8 people part time, including a chef by the name of Kerry Jones. Events held at the venue include the chairs, tables, tablecloths, chair covers and the building. Catering and decorations are available at an additional fee. Jones said the building can accommodate up to 200 people.

If the event planners so choose, they can bring their own food and refreshments, so long as they abide by the city’s ordinances.

During the last couple of years, the venue has been the venue where the Greater Picayune Area Chamber of Commerce held its Annual Awards Banquet and Police and Fireman’s Banquet. It has also hosted a recent George Washington Carver High School Banquet, father daughter dance for the Civic Women’s Club Juniorettes, an event for staff at Nicholson Elementary, among many others.

“We must be doing something right,” Jones said.

Jones said she hopes that more organizations start holding their events at The Grand, which will allow her and her staff to become more involved in the community.

“We want to keep the money in this community,” Jones said.