Goodwill to have new location 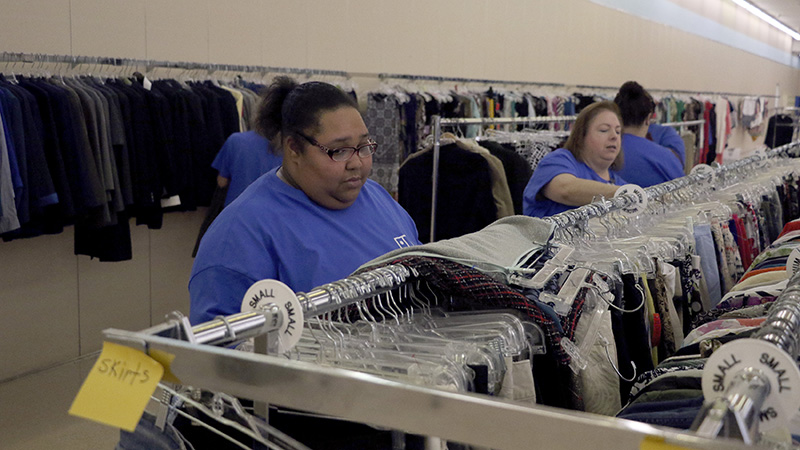 MORE STOCK: Seven new employees were recently hired at the Picayune Goodwill. They are currently stocking the shelves at the Memorial Boulevard site, which will open on July 12. Photo by Jeremy Pittari

Goodwill of South Mississippi is in the process of relocating the Picayune store to a more visible location that will also provide three times the space.

Valerie Ward, Vice President of Retail for Goodwill of South Mississippi, said the work to relocate to the new location is underway.

Not only will the new location be more visible since it will be situated on Memorial Boulevard, it will increase the square footage of the store from the current location’s 5,000-square-foot to 17,000-square-feet. The larger space will designate Picayune’s Goodwill as a superstore, one of only four in this region.

With so much extra space to fill, Ward said stock from other locations had to be brought in.

That extra room will also mean there will be more furniture, shoes, household goods and other items for customers to choose from, Ward said. Goodwill also stocks used electronics, purses, toys, clothes and bicycles.

She expects the move to make it easier on those who donate to Goodwill. While donations will need to be brought to the rear of the shopping center, everything about the new location is more accessible.

Ward said Goodwill in Picayune hired about seven more people, to bring the total number of staff to 14, to not only stock the store, but also staff it once it opens officially.

Goodwill of South Mississippi has 13 locations in Mississippi, and two donation centers where extra stock is diverted to where it’s needed most.

A grand opening of the new storefront in Picayune will be held July 12, starting with a ribbon cutting at 10 a.m.

After the ribbon is cut, a daylong event of specials and refreshments will take place. The first 50 customers will receive a $10 gift certificate and everything in the Picayune location will be 50 percent off the entire day.

Free hot dogs and drinks will be provided while they last.

While most donations will need to be brought to the store, Ward said pickup is available in the Picayune area for furniture and other large donations.

The Picayune location of Goodwill is open Monday through Saturday from 9 a.m. to 8 p.m. and Sunday from 1 p.m. to 6 p.m.

Goodwill is currently located at 901 Palestine Road. The new location will be at 795 Memorial Boulevard.