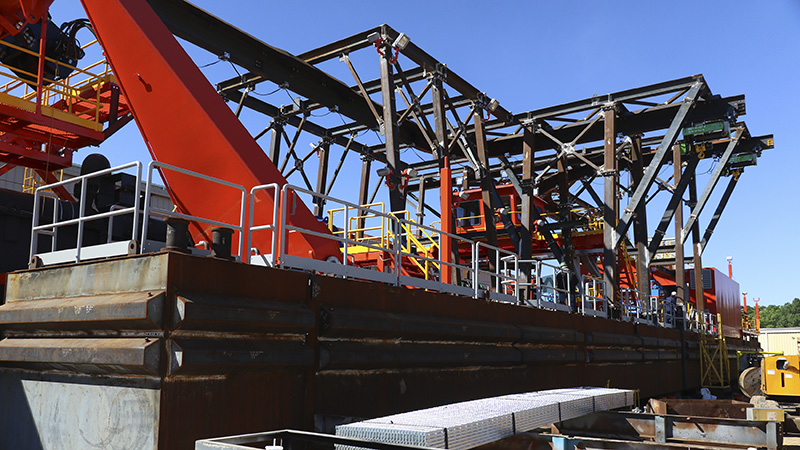 LARGE UNDERTAKING: This two million pound dredge is currently under construction at DSC Dredge in Poplarville. When complete, it will be tested before being taken apart and shipped using 40 trucks to a business in Canada where it will be used to collect oil from sand. Photo by Jeremy Pittari

Residents and visitors to Poplarville may notice a large piece of equipment under construction at a facility located off of Highway 53 in town.

With its bright red and blue paint mixed with bare steel, a two million pound dredge is under construction at the Poplarville location of DSC Dredge LLC.

DSC President Bob Wetta said the company has been operating in the Poplarville area since its establishment in the mid 1980s, and has other locations in Reserve, La., and Greenbush, Mich.

While Reserve is the corporate headquarters, and the facility where 74 of the company’s 125 total employees punch the clock, Poplarville is where most of the structural fabrication for orders takes place before the dredge is sent to Reserve for final outfitting. Forty-five people work at the Poplarville facility and seven are employed at Greenbush, Wetta said.

Currently, another 15 employees from Reserve are staying in rental housing in Poplarville while they assist with construction of the large dredge. When customers stop in Pearl River County to visit DSC Dredge, they typically stay at hotels in nearby Picayune, providing another boost to the local economy.

When the order under construction at the Poplarville location is complete, the finished product will be disassembled and shipped to the customer in Canada via 40 trucks, Wetta said.

Construction of the dredge started in August and will be complete by July, but from design to the end of construction, Wetta said this one project will take about 18 months and require 125,000 man-hours. Once received by the customer, it will take three months to reassemble, said Director of Quality Assurance Christopher Hunt.

DSC can manufacture dredges of most any size to meet the customer’s unique needs.

In the instance of the current project, it will be used by a company in Fort McMurray, Alberta, Canada to remove oil from sand.

Between all three locations, the company produces between 20 to 25 dredges of various sizes annually.

Of the dredges his company makes annually, about 50 percent are exported to other countries. That fact earned DSC Dredge three awards for excellence in exportation, which entail two E-Star Awards in 2012 and 2016 and one E-Award in 2007.