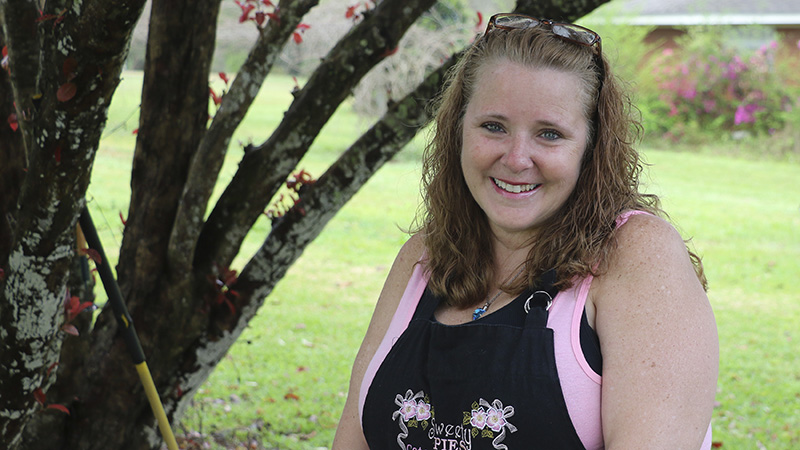 LABOR OF LOVE: Kriss Amacker, pictured, has been making sweets for the community for the past eight years. She is currently working to expand her cooking services to catering events as well. Photo by Jeremy Pittari

There’s one thing Kriss Amacker loves to do with her free time, cook. And now she’s found a way to make a living doing it.

Cooking has been a part of her life since she was 12-years-old and helped with the cooking for her great grandmother’s 80th birthday.

“I love to cook and making people happy with food,” Amacker said.

As a result she is working to grow her home-based business, Sweety Pies Catering and Bakery.

Formerly a resident of the state of Colorado, she moved to Pearl River County about 10-years ago to be with her husband of eight years, who she met due to his service in the military.

Her experience in preparing food for others also includes 15 years working for a major restaurant chain.

She said she made her first cake for a wedding about eight years ago and has been baking items for sale ever since.

But the recent passing of her mother about six months ago pushed her to expedite her ultimate goal to establish her own catering business and make time for herself and her family. Amacker said that prior to her mother’s passing, her mother called to say that she wanted to move in with Amacker so her daughter could use her small home on the same property as a kitchen.

Two days later, her mother passed. Now efforts are underway to renovate the small home to suit her catering needs.

Currently, Amacker has a cottage license in the state of Mississippi, which she uses to produce baked goods for sale at local trade shows, businesses and festivals.  She said she’s participated in Poplarville’s Blueberry Jubilee for the past seven years, and recently sold a number of her baked goods at a trade show on the Gulf Coast.

Once the larger kitchen is ready, she plans to secure her catering license so she can expand her services to include catering.  While she currently provides cakes and at times meals for weddings of friends and family, she aims to serve a wider audience when she obtains her catering license.

But for now, her baked goods and candies can be found at 235 Coffee and Mia’s Sweet Box, both in Poplarville.

Spay and Neuter program at SPCA