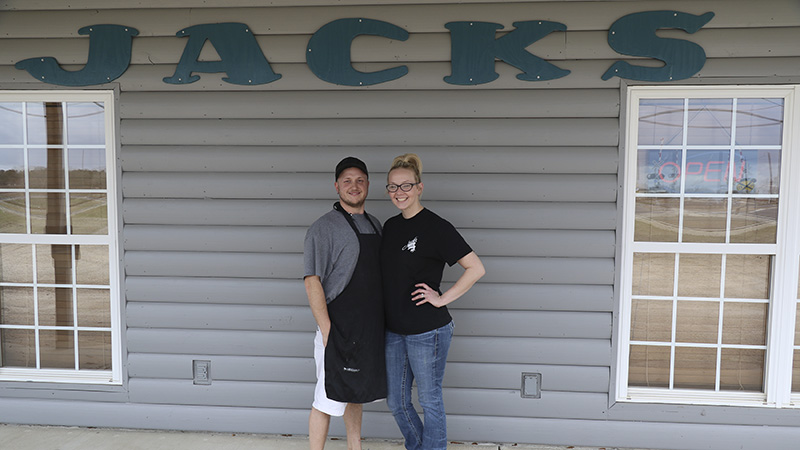 NEW DIRECTION: From left, Scotty and Malorie Welch are making some changes to Jack’s Fish House as the business’ new owners. Photo by Jeremy Pittari

Since 2003, a local seafood restaurant along Highway 11 has been run by the same family, even though it’s changed hands three times.

Scotty and Malorie Welch took ownership of the local business in Sept. of 2016, but it was established by her grandfather in 2003. For a time, it was leased to another member of the extended family before Malorie Welch and her husband bought it

Since Malorie Welch has worked there since she was 14-years-old, she and her husband jumped at the opportunity to assume ownership of it.

“I didn’t want it to go out of the family,” Malorie Welch said.

True to its name, the restaurant serves seafood dishes. But Scotty and Malorie have expanded the menu to include hamburgers, poboys, pasta, corn and crab bisque and several other dishes. Malorie said one of the most popular is the seafood baked potato, which comes with crabmeat dressing, crawfish sauce and four jumbo butterfly shrimp.

A number of desserts have also been added to the menu, including blueberry cobbler, white chocolate cheesecake and ice cream.

There are also plans to add fish tacos to the menu within the next month or so.

While the business is officially open Thursday, Friday and Saturday from 4 to 9 p.m., the restaurant is also available to cater to private parties during the off days. Scotty and Malorie said they take the rest of the week off to spend time with their children.

Scotty said there are also plans to open the business on Sundays to provide a country style buffet.