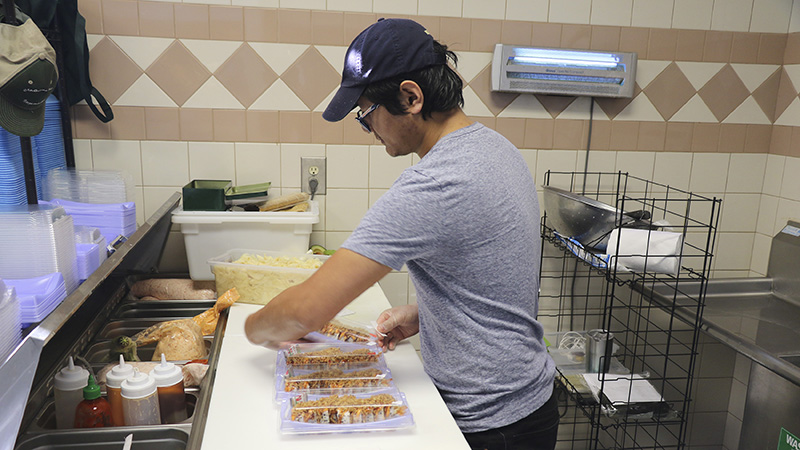 FRESH DAILY: John Hei, an owner of J&M Sushi, now provides his sushi products through an agreement with owners of the Claiborne Hill Supermarket in Picayune. Photo by Jeremy Pittari

For more than 35 years Claiborne Hill in Picayune has allowed residents to fill their pantries.

Garrett Acquistapace manages both the Picayune and Waveland locations and said that business has been good at each.

The most recent addition to the Picayune location of the grocery chain was fresh sushi, which is made in the seafood department daily. Each day John Hei arrives at the store to prepare the food items, before packaging them up for display in the cold case at the front of the store. Acquistapace said the new item is part of a partnership he and Hei recently formed. Acquistapace said he plans to bring the new item to the Waveland location in the near future. Hei and his wife Misa own the company under which he operates, called J&M Sushi.  Acquistapace said he had been considering adding sushi for some time, but it wasn’t until he was approached by Hei that a deal was struck. So far, Acquistapace said he is happy with the public’s interest in the product.

Two other additions have occurred at the locally owned and operated grocery chain, including bulk grains on aisle 1 and a larger craft beer selection. Acquistapace said he also plans to have the parking lot repaved in the near future.

But it’s not what was added that has kept the family owned business going. Acquistapace feels that the hot lunches sold in the deli also bring customers to his doors.

“I think we do a good job and have a good product that is consistent in quality,” Acquistapace said about the items offered in the deli.

To that end, he said the soups and gumbo offered in the deli are all store made. Additionally, king cakes are made in-store as well.

Long-term goals include an expansion to the Picayune location, but Acquistapace said no timeline has been determined.

Even though the local grocery store did not open it’s doors in Picayune until the early 1980s, Acquistapace said his family has been in the grocery business since the 1800s. According to previous coverage the Claiborne Hill name began with a store in Covington that opened in 1963.

Additionally, Acquistapace said his mother is part of the Schwegmann family, who owned a chain of grocery stores in Louisiana.