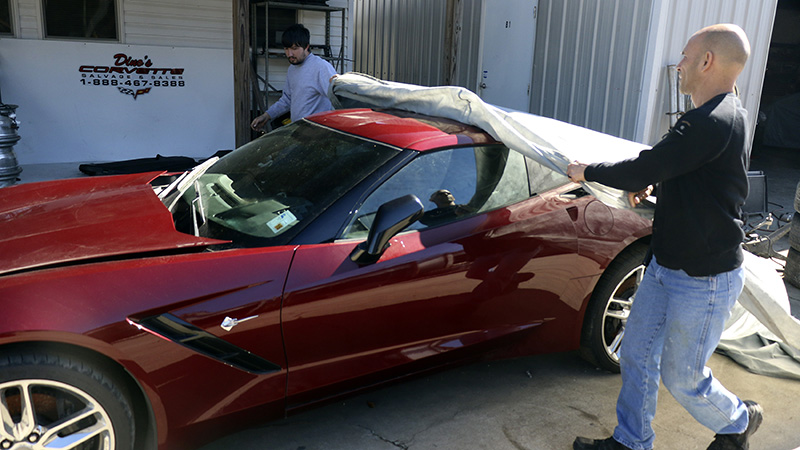 THINGS OF BEAUTY: Dino Behler, at right, covers one of the many Corvettes he has at his local business where he parts out wrecked and salvaged cars. Photo by Jeremy Pittari

Car enthusiasts across the Gulf Coast and beyond looking for Corvette parts will more than likely find them here in Picayune, even if they never step foot in Pearl River County.

Dino Behler is the owner of Dino’s Corvette Salvage, a local business that has specialized in carrying spare parts for the American made sports car for almost 20 years.

He gets his parts from wrecked or salvaged vehicles by purchasing the entire vehicle and parting it out himself.

Behler said he started the business in 1998 in the Kenner, La., area, where it stayed until 2004 before moving the entire operation to the Picayune area.

When he moved it to Pearl River County along Highway 43 North, he built a large salvage yard and building. But now the face of that building has another name since he sold the majority of the land and the building to Modern Auto Wreckers in 2009. Dino’s Corvette Salvage now operates in a smaller portion of the lot next-door, a bit obscured from the roadside. Behler said he made the decision to downsize because the business grew too fast and the overhead was eating into his profits. Now he operates with a staff of just two.

His love of Corvettes began back in high school when he worked on the vehicles as a hobby. Before he graduated in the mid 80’s, he owned three versions of the iconic car, all paid in full.

His first Corvette was purchased with money he borrowed from his mother, which came out of his college fund, with the stipulation that he would pay it back. Not only did he put the money back in his college fund, by the time he was ready for college he had saved up $50,000 from buying and selling Corvette parts and cars.

Prior to opening the business, he sold long distance phone service as a broker, a business model that he translated into his salvage company.

While parts can be purchased from the yard in person, a majority of his customers purchase parts through his website or through ebay.