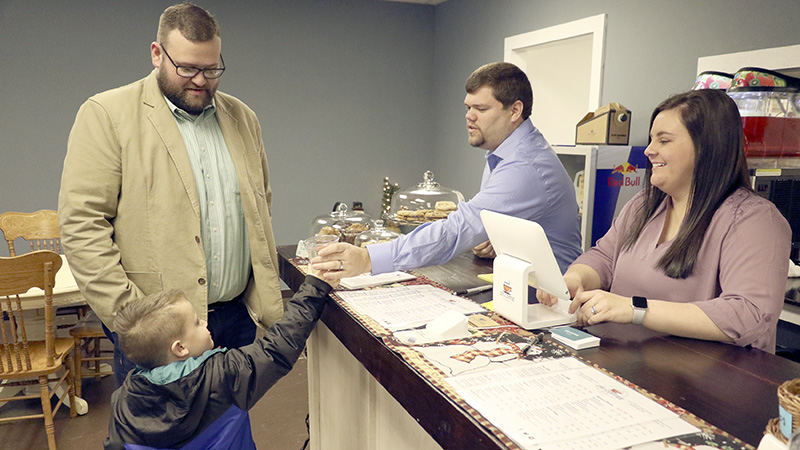 FRIENDLY SERVICE: At left, Billy Hartfield and his son Benson are served drinks at 235 Coffee by co-owners Benjamin and Brandy Whatley. Photo by Jeremy Pittari

Poplarville’s only coffee shop is now under new management and has moved to a new location.

It’s called 235 Coffee and despite the current lack of an official sign at the roadside, it’s quite a busy place.

Co-owners Benjamin and Brandy Whatley said they bought the business from its previous owner and decided to relocate it to a larger venue. The business had a soft opening by spreading the word on social media on Dec. 18, and Benjamin said the response has been good so far.

In addition to offering specialty coffee based drinks, 235 Coffee also offers sandwiches, muffins, fresh croissants, and cookies. To give the children something to drink slushy machines were added.

Benjamin’s professional background is in computers, so it’s no surprise to see that he and his wife’s new business venture not only offers Wifi to customers, but also allows them to pay with their cellphone, provided they have the proper app. The business also accepts all other forms of payment.

The business’ new location is 1214 S. Main Street in Poplarville.

Benjamin said he chose the location because it is larger and allows he and his wife to work out of a larger kitchen.  Work to renovate the space started in November, and while the doors are officially open, there’s still some details to finalize, such as the addition of more tables. The extra space means the business can cater to the needs of large or small business meetings.

In the future, the couple wants to add soups to the menu to go along with the sandwiches and pies to the list of baked goods. Lunch menu items currently include the following sandwiches, chicken salad, avocado salsa, hot ham and cheese and a grilled cheese made with lots of cheese, Benjamin said.

The business also offers its own coffee blend, which is roasted by a company in New Orleans. Customers can also purchase an already brewed cup of Death Wish Coffee, which is marketed as the strongest coffee in the world. One-pound bags of their house blend and Death Wish Coffee are also available for purchase.

An official grand opening and ribbon cutting will be held on Jan. 15.