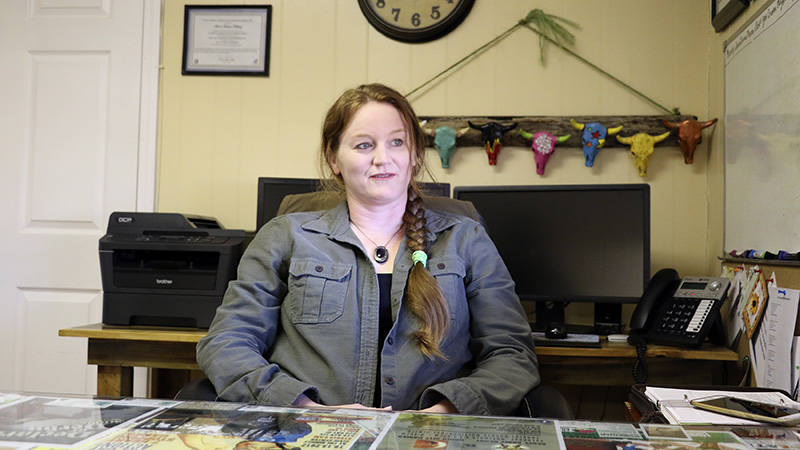 ON THE RISE: Heather Holliday, owner and operator of Holliday Real Estate, said she has noticed the residential market is on the rise in Pearl River County, while commercial properties languish. Photo by Jeremy Pittari

Since 1975 Holliday Real Estate has been serving the Poplarville area, and now Picayune and the Gulf Coast region, with their real estate needs.

The agency’s most recent owner, Heather Holliday, took over ownership of the business several years ago after initially taking some advice from her father.

She said she never had intentions of running the family business. It actually started with her interest in buying dilapidated homes to fix them up and flip them as a way to address the growing number of neglected properties in Poplarville.

Six years ago she bought her first home with that goal in mind, but after getting it ready for the market and listing it with other local agencies, for some reason the house just didn’t sell.

After complaining to her father about the difficulty she was having selling the house, her father told her she could continue to complain about the situation, or fix it by becoming a real estate agent herself.

After taking her father’s advice and becoming a licensed agent about three years ago, she took it a step further and became a licensed broker, eventually assuming ownership of the family business.

Currently, the market in the Poplarville area is booming, with most residential properties priced in the range of $100,000 to $180,000 that are move-in ready selling faster than she can list them.

One of the ways her business has been able to expand was to join the Gulf Coast Association of Realtors, a move that provides her agents with access to listings across the Mississippi Gulf Coast and allows agents on the coast to see her Pearl River County listings.

Holliday said Pearl River County is in a prime location to become a hub to so many larger areas. And that fact has not been lost on Gulf Coast residents looking to move a bit further north out of the path of storm surge.

Board membership has other advantages as well. Due to Mississippi’s current status as a non-disclosure state, a lot of information about property sales is closed to the public. For instance, every deed filed in the Pearl River County Chancery Clerk’s office states that it was sold for $10, no matter the actual purchase price. However, her membership with the Pearl River County and Gulf Coast associations allows her access to each areas Multiple Listing Service, which contains the actual purchase date and price for each listing, in addition to other information, which is used to determine accurate price comparisons when listing homes.

Despite an early 21-point deficit, Poplarville tied the game…