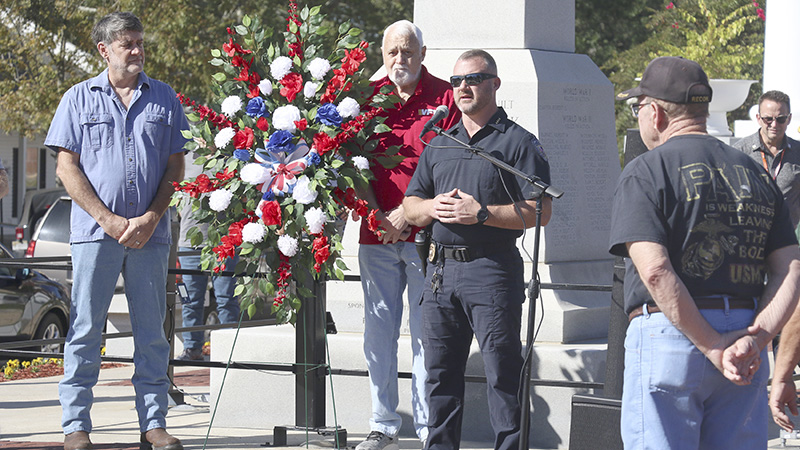 Picayune Police Chief Joe Quave speaks about service during the annual wreath laying ceremony held Friday morning at the Veterans Memorial in front of the historic side of City Hall. Photo by Jeremy Pittari

Friday morning, local veterans, community members, law enforcement personnel and elected officials gathered at the Veterans Memorial in front of the historic side of City Hall in Picayune to hold a wreath laying ceremony for Veterans Day organized by the local chapters of the Veterans of Foreign Wars and American Legion.

Representative Stacey Wilkes, City Councilor Frank Ford and Picayune Police Chief Joe Quave spoke during the ceremony, which included musical performances by the Picayune Memorial High School band and a presentation of the colors by the school’s NJROTC.

Wilkes took a moment to thank all current and past service members for their sacrifices, which have helped form a nation like no other in the world.

Ford said his father served in the Korean War, and while he didn’t say much about his time overseas, he did say it was cold.

“I would like to thank all who are currently serving and protecting us to keep us free and safe,” Ford said.

Police Chief Joe Quave thanked all service members for their unselfishness in serving this country day in and day out.

He added that the Picayune Police Department and Pearl River County Sheriff’s Department have a number of veterans on staff, further reflecting that service never stops.