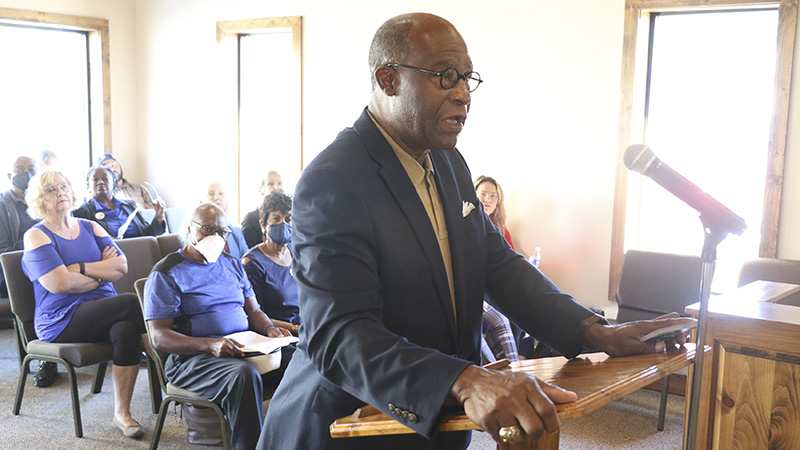 A congressional candidate stopped by the Pearl River County Board of Supervisors meeting Monday morning.

Johnny L. Dupree, the democratic candidate running for the United States House of Representatives in the Fourth Congressional District, said he has been traveling the 12 counties involved in that district. His platform for office includes concern that for the last two Census counts, the state of Mississippi has lost population and in turn representation and subsequently money on the federal level.

“Population means dollars. In a state like Mississippi we need every dollar we can get,” DuPree said.

His political career includes time as a member of the Hattiesburg School Board of Trustees, Forrest County Board of Supervisors and he served as mayor of Hattiesburg.

At the conclusion of his speech, Board President Sandy Kane Smith asked DuPree to take a look at the post office located across the street from the Board’s meeting room. The post office in Poplarville has been unusable since the roof collapsed back in January of this year. Customers now do business out of a post office van.

Also during the meeting, the Board approved a motion to allow Maj. Marc Ogden to purchase his duty firearm for $1. Ogden will be retiring from the Pearl River County Sheriff’s Department on Friday, Sheriff David Allison said.

Les Dungan with Dungan Engineering addressed the Board about several projects underway. One of those projects involves replacing a bridge on Charlie Daughdrill Road. Dungan said work on the bridge was conducted about 20 years ago, but that involved putting a concrete surface on wood pilings. Now the wood pilings need to be replaced because the concrete top has outlived the support structure, Dungan said.

The Board also considered quotes from four companies to repave the asphalt at three of the county’s walking tracks. The work will be conducted at the Carriere, McNeill and Henleyfield walking tracks and will include paving and cutting out roots that are causing the walking surface to be uneven.

Work on the countywide paving project is also progressing. Since Nov. 2, the contractor and county crews have paved more than 50 miles of county road. Dungan said additional roads have been added to the project, bringing the projected total in this phase to 71 miles.

During the entirety of phase 1 of the project completed last year, the county spent about $2.8 million. This year, Dungan said the county has spent about $3.7 million, in part due to rising costs, but also because more miles were paved in the second phase so far.