County’s permit to repair weir sent back by Corps 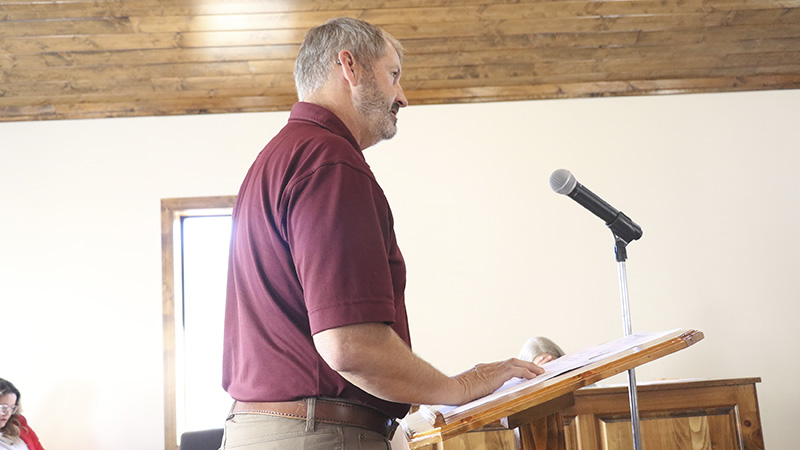 Les Dungan with Dungan Engineering informs the Pearl River County Board of Supervisors that the nationwide permit submitted by the county to the Corps of Engineers to repair the weir on the Pearl River was sent back, with the recommendation that the county hold a public comment period, effectively pushing those repairs back by months. Photo by Jeremy Pittari

The flow on the east Pearl River is at a record low, partially due to the lack of rain and mostly due to the failure of the weir at Wilson’s Slough.

Les Dungan with Dungan Engineering said the flow is now at the fifth lowest on record.

A recent drone survey of the river showed that the river from the boat launch on Walkiah Bluff Road to the weir is nearly completely dry from bank to bank.

The county recently submitted a nationwide permit to the Corps of Engineers to get permission to conduct repairs to the weir, but Dungan said a representative with the Corps sent it back with the suggestion the county submit a full permit application. Dungan said that process would require a public comment period, severely delaying the process by at least 180 days, if not longer.

Dungan suggested the county, and other entities in the area, voice their concerns about the low flow on the river to the Corps of Engineers.

In other business, the Board approved a motion to replace flooring in the Whitesand Community center. County Administrator Adrain Lumpkin said the center is county owned, and was built about 25 years ago. He said the lowest bid to replace the flooring came in at $12,000.

Lumpkin said the facility is also used as a voting precinct.

“You can see on the list where politics lie, the city of Jackson got the most,” Ward said.

Ward said the projects submitted by local governments were stellar so she is disappointed that none were approved.

Circuit Clerk Nance Stokes said the roof of the old courthouse still leaks in about four spots when it rains, and there appears to be a problem with the sewer line. It was determined that old lines were tied in with new lines.