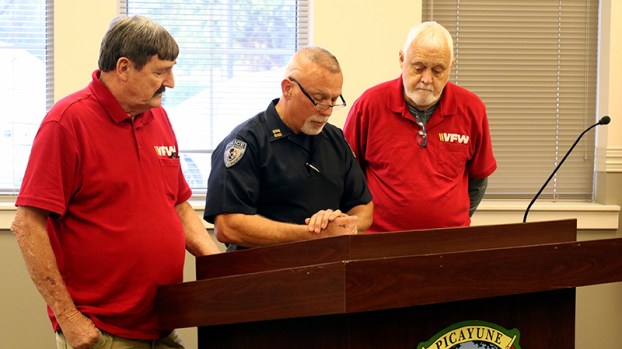 Morgan Bennett, pictured at far left, looks on as James Drewery with the Picayune Police Department reads the accolades Bennett achieved during his 35 years in the armed forces. Bennett was named Veteran fo the Year by the City Council. At far right is Ronnie Stogner. Photo by Jeremy Pittari 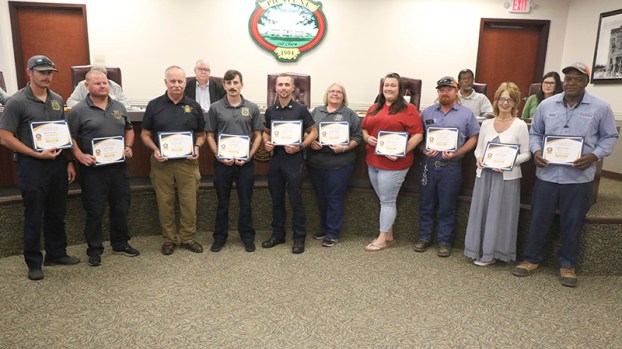 The first Veteran of the Year celebrated by the City Council was Morgan Bennett.

James Drewery with the Picayune Police Department introduced Bennett to the Council, saying he is a lifelong resident who enlisted in the Army at the age of 19 in 1970. Bennett was sent to serve in the Vietnam war from 1970 until 1971 with the Bravo Battery 3rd of the 16th Artillery. He later completed his career in the Army with the 2nd of the 2nd Recon Cavalry in Germany.

His service in the armed forces continued after his time in the Army with 32 years in the Mississippi National Guard headquarters 890th Engineers unit, where he was deployed to serve in Operation Iraqi Freedom from 2003 to 2004 at the age of 55.

When he returned from Iraq, he retired from the armed forces in 2005 at the rank of Sergeant First Class (E-7) with a total of 35 years of service.

The Council and mayor also recognized several employees who have put in five years or more of service as of this month. Those employees included Theresa Milar with 37 years, Fire Chief Pat Weaver with 26 years, Ottis Mitchell with 26 years, Bruce Penton with 21 years, Ashley Poole with 10 years and Hunter McElray, Chase Mitchell, Jeanna Ritchie, Christopher Penton, Richard Neil Smith, Anthony Moore, Aaron Grob, Charlotte Brown and Terry Wall, all of which put in five years of service to the city.

In other business, Pearl River County Economic Development District Director Lindsay Ward updated the Council about a grant that has been submitted to help in the development of a technology park across from the city’s Municipal Airport. She said the grant is expected to provide enough funding to clear about 10 acres of the 28.7 total aces of the county-owned site.

In other grant related business, the Council approved a motion to accept a grant totaling $124,150 for use by the Picayune Police Department to hire a police officer who will work juvenile cases.

Police Chief Joe Quave said the grant will pay for three of a five year term for the department to hire a new officer to work with the local juvenile court and keep up with juvenile cases.

Grant Administrator Lisa Albritton said the city will be responsible for covering the payroll and other expenses for that new officer for the remaining two years. A requirement of the grant states the city employ that person for a total of at least five years, but if that employee decides to leave before that time is up, the city will have to replace them for the remainder of the time frame.

Quave said the goal of that officer will be to work with juveniles to ensure they don’t become a problem for law enforcement as an adult.