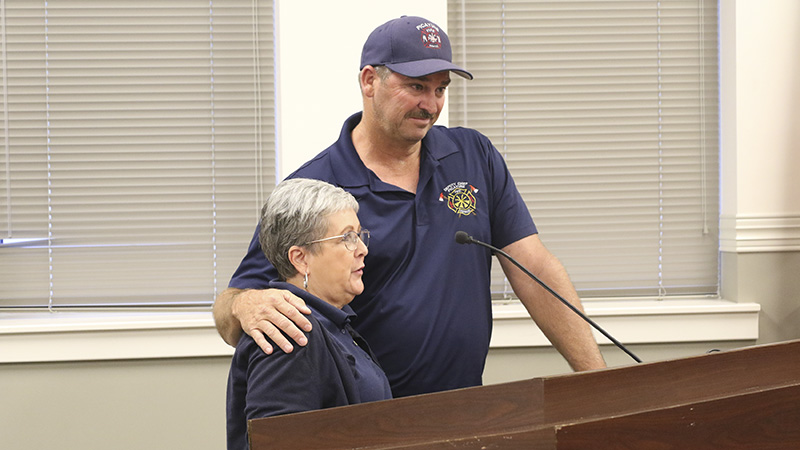 From left, Janet Guidry with the Picayune Fire Department speaks about Deputy Chief Ronnie Reynolds, who is retiring from the department after 29.5 years of service. Photo by Jeremy Pittari

This year, the city of Picayune will offer the community the chance to sponsor a tree that lines the walking track at Crosby Commons, allowing them to decorate that tree in time for Christmas.

Grants Administrator Lisa Albritton said a total of 20 trees are available for sponsorships, which cost $50 each. While the city will provide the lights, the sponsor will have the ability to decorate that tree to their liking.

The lights will be turned on during a tree lighting ceremony scheduled for Dec. 1, at 5:30 p.m. The event will also feature Santa and Mrs. Claus so children can have their photo taken with the festive couple.

The Council also approved a motion to accept a change order from J. Patrick Lee Construction LLC totaling $2,179 to extend a sidewalk from the T-ball field to the restroom and concession stand. The cost is due to the unexpected discovery of utilities in that area, said Devin Hedgepeth with Dungan Engineering.

After being recognized for his decades of service to the city of Picayune, the Council was informed that Picayune Fire Department Deputy Chief Ronny Reynolds will be retiring from the city. He put in 29.5 years with the city, not counting his accrued vacation and sick leave.

“Helping others is what he always wanted to do,” Guidry said.

During his time with the department, he assisted in the birth of a child in the back of a vehicle at the Road Runner convenience store.

He took over as deputy chief after the retirement of previous Fire Chief Keith Brown and previous Deputy Chief John Mark Mitchell in 2020. While Pat Weaver took over as fire chief after Brown’s retirement, a replacement for Reynolds was not announced at the meeting.

Reynolds said he enjoyed every minute of his time with the department and will miss it.

The Council approved a motion to allow Reynolds to purchase his badge and helmet for $1.