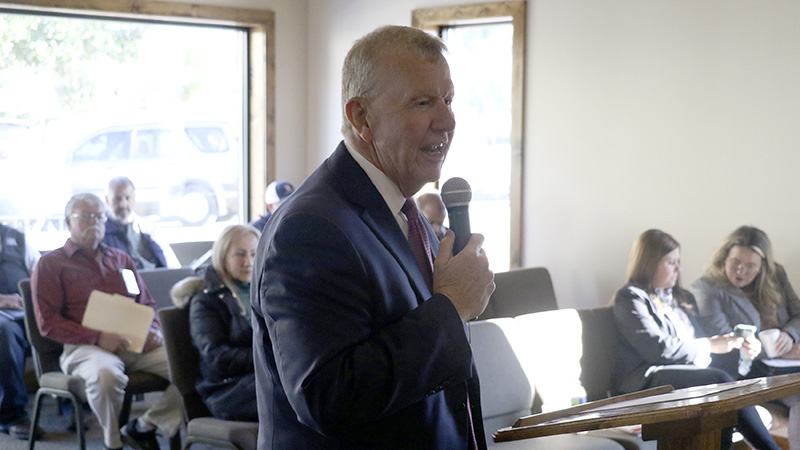 Mike Ezell, a candidate for the seat of Fourth Congressional District Representative in the House of Representatives, spoke to the Pearl River County Board of Supervisors during Wednesday’s meeting. Photo by Jeremy Pittari

Pearl River County’s Board of Supervisors received a visit from a candidate on the campaign trail during Wednesday’s meeting.

Mike Ezell was selected as the Republican candidate for the upcoming election that will decide who will be the next Fourth Congressional District Representative in the House of Representatives. Ezell beat incumbent Steven Palazzo in the primary.

He goes on to face Johnny L. DuPreee (D) and Alden Patrick Johnson (L) in the general election set for Nov. 8 of this year.

During Wednesday’s meeting he said he decided to run for Congress after he “felt like God called me to do something.”

He said that if elected, he will “be someone who shows up, stands up and takes responsibility.”

The Board also heard an update from Les Dungan with Dungan Engineering concerning the countywide paving project.

He said the contractor is set to return next week to pave more streets. While he feels the initial goal to pave 60 miles of roadway in this phase of the project was lofty, but the project has resulted in more mileage being paved in this phase than in all of the first.

Cost increases are also affecting the total price of the work. Asphalt increased to $77 per ton, up from the previous cost of high $60s and low $70 rates charged at the start of the project.

Fuel adjustments in this time of high gas prices have also had an impact. So far in the second phase, the county has spent $3.1 million on the project.

Some adjustments to the project concerning which roads will be paved were also made. Dungan said that if a crew was in an area working on a road that had a small dead end road nearby, they crews repaved that road as well.

“It makes sense to hit it while we are there,” Dungan said.

The Board also approved a bid to replace a bridge on County Farm Road. Dungan said he estimated that project would cost about $403,000. Eight bids were submitted, ranging from a low of $408,000 to as high as $520,000. The Board approved a motion to accept the low bid.

He added that there is some left over funding from grants received, and suggested using those funds to repair more bridges. Dungan suggested the Board consider the four worst in the county, which are located on Charlie Daughter Road, Olive Church Road, Edmond Jones and another on Hickory Grove.

All of those roads are still open to traffic, but are rated for low weight vehicles. A decision on which bridge to replace will be made at a later date.

The effort to replace all bridges that have wood piling supports has so far replaced more than half of the 35 that were identified at the start of the project. Dungan said about 12 to 15 are left and two are being replaced currently.