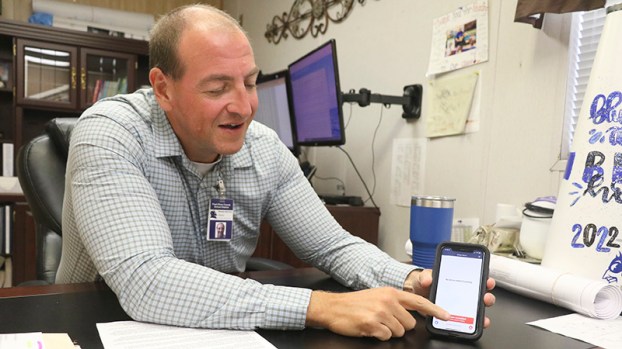 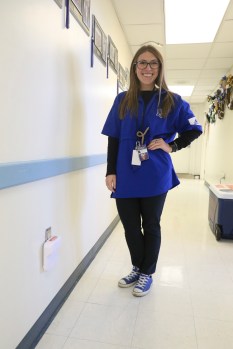 Devin DeHarde shows off the new badges given to all staff that can alert administrators and school resource officers of emergencies with the simple press of a button. Photo by Jeremy Pittari

By utilizing a Department of Justice COPS Grant worth $500,000, security at Pearl River County School District has reached a new level.

District Finance Director said the grant had a 25 percent match requirement, and brought with it a number of security improvements.

Now, every staff member in every campus carries a specialized badge that can be used to alert administration and the district’s school resource officers of emergencies. The badge has a button so it can wirelessly communicate with the system. If that button is pressed three times in succession, school resource officers are alerted that there is a situation in that classroom, such as fight or other minor emergency. Campus Police Chief Brandon Herrin said the system provides a GPS like location of the class where the emergency is occurring on his cellphone.

In the instance a major emergency, such as an active shooter, the staff member can hit the button eight times or more in succession, alerting the administration and locking down the entire campus. Not only are school resource officers notified, but the system calls 911 and sends a direct notification to personnel at the Pearl River County Sheriff’s Department.

The system also allows for drills for a variety of situations, such as a fire, tornado and active shooter scenarios.

Wednesday morning the staff and administration at the Pearl River Central High School conducted a fire drill. During the drill speakers inside and outside the classrooms alerted those on campus that a fire drill was underway. Even outside the alert was audible, and within only a minute or two students and staff began filing out to the predetermined meeting point.

All across the campus, blinking lights flickered green to indicate a fire drill was underway. The newly installed lights blink a certain color based on the scenario, such as green for a fire. When drills are conducted, emergency personnel are given advance notice to let them know it’s only a drill.

Each campus is also electrically locked at all external entry points, preventing outside traffic from entering the campus. Herrin said new fencing is also planned at the Carriere campus to prevent vehicle traffic from accessing certain points.

Within each classroom are safety devices that can be put into action that will prevent anyone from entering the room and also protect the window on the door.

Picayune School District has some plans to improve security as well. Superintendent Dean Shaw said plans are in place to add fencing in areas where it is absent at certain campuses, and a security station is planned for construction at the entrance to the high school. According to previous coverage, a security professional will man that station and ensure only students and staff enter. The district also hired another school resource officer so there will be one stationed at every campus.

Shaw said there are other improvements planned to improve the safety of each campus for the sake of students and staff.

“We appreciate the school board for supporting the improvements. The safety of our students and employees are our number one goal,” Shaw said.

Poplarville School District has also taken steps, such as securing the entrances of each campus so visitors have to get permission before being allowed in and hiring two additional school resource officers so each campus has an SRO. Fencing improvements are also planned for some areas.

“After the last shooting in Texas, we felt like we needed to have an SRO at every campus,” Superintendent Jon Will said.