PRC earns first win of the season, 48-14 against Long Beach 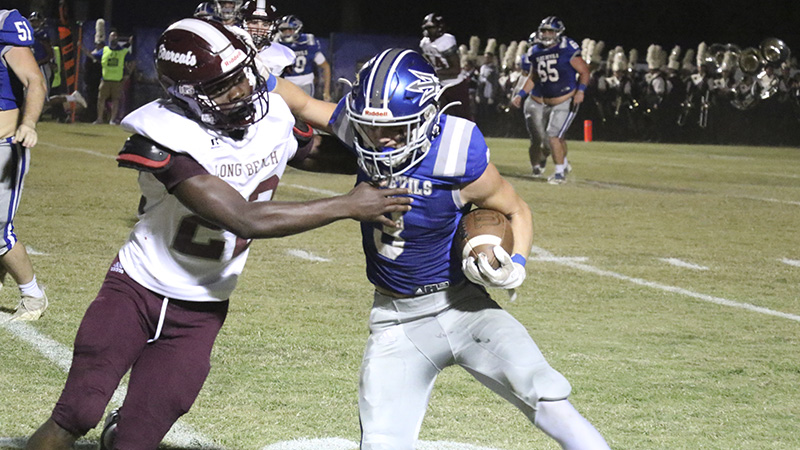 Pearl River Central’s Blue Devils shook off this season’s losing streak with a strong win over the Long Beach Bearcats 48-14 Friday night. Every scoring play took place in the first half of the game.

The Blue Devils dominated on both sides of the ball on the night, scoring 27 points before the Bearcats got on the board.

PRC’s first touchdown of the night occurred early in the first quarter. Through six plays covering about 58 yards, the Blue Devils reached pay dirt from four yards out when Matthew Michele scored with 8:55 still on the clock. A missed PAT put the score at 6-0.

The Bearcats took over on offense, but after seven plays could not get enough first downs to maintain possession. On the attempt to punt the ball, the ball flew over the punter, putting the ball within striking distance of the end zone. The Blue Devils took possession of the ball at the Bearcats 16 and two plays later Michele earned another touchdown from 11 yards out. Brody Marshall’s PAT put the score at 13-7 with 3:56 left in the first quarter.

With the Bearcats back on offense, three plays into the drive an interception by the Blue Devils’ own Konner Cazenave gave him the opportunity to carry the ball for more than 50 yards for another PRC touchdown. Marshall’s PAT helped bring the score to 20-0 with 2:26 left in the quarter.

PRC widened the lead in the second quarter with 11:05 left before the break when B.J. Bello ran the ball from 37 yards out to the end zone. Marshall’s PAT added to PRC’s 27-0 lead.

Long Beach got on the board when one of their players reached the end zone from a yard out. The Bearcat’s PAT attempt brought the score to 27-7.

A Qorday Russell pass to Tristan Williams widened the Blue Devils lead to 34-7 with 2:20 left in the second quarter.

The Bearcats added to the board for the final time just before halftime when Will Brady completed a pass to Cornelius Fairley from more than 50 yards out. With only 1:04 left before the break, the score was 34-14.

PRC scored two more times before halftime in that minute. With 23 seconds left, Russell completed a pass to Makade Penton from the Bearcats’ 23 yard line, widening the lead to 41-14 after the PAT.

During the Bearcats’ subsequent possession, a fumble gave PRC possession of the ball, and through three plays Bello crossed the end zone from 24 yards out just as the clock wound down to zero. The successful PAT widened the final score to to 48-14.

“Winning is great. I’m not going to be able to get the smile off my face for at least 48 hours. This is a team that was young coming into the season. I feel like we’ve gotten better every single week. We played our two toughest district opponents the first couple of weeks. Everybody wants to write us off, and say that we’re no good, whatever. We know what we got coming down the line. We got George County next week, we have Vancleave still in the thick of things. We’re going to make the playoffs, that’s our goal,” said Head Coach Jacob Owen.

PRC will travel to George County next week with a 7 p.m. kickoff set.