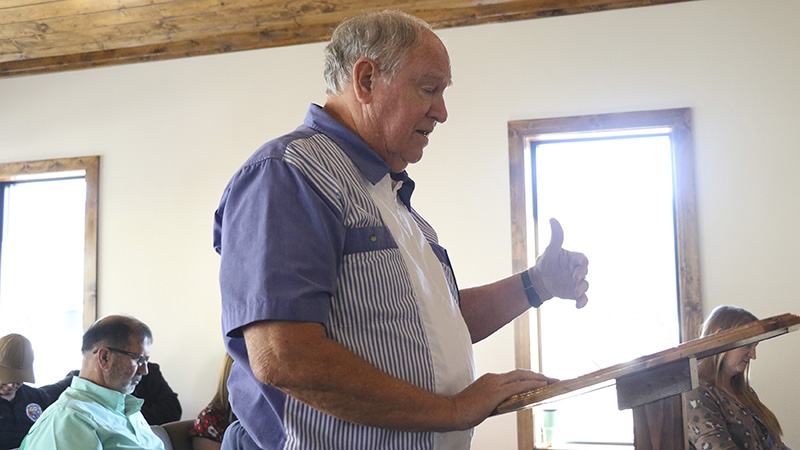 Darrell Fuller, a member of the Poplarville Airport Board of Directors, informed the Pearl River County Board of Supervisors that there is enough funding for the facility to not ask for money from the county. Photo by Jeremy Pittari

Some good news was provided to the Pearl River County Board of Supervisors during Monday’s meeting, the Poplarville Airport needs no additional funding from the county.

Poplarville Airport Board member Darrell Fuller said the facility’s account has about $50,000 on hand and has reached a point where it is self sufficient financially.

The next project planned to upgrade the facility is to repave and restripe the runway. Three grants were recently awarded to the airport, totaling $53,000 which will be used to conduct projects. Fuller said he will not be asking the county for any additional funds this year.

Fuller said the facility is capable of accommodating a C-130, and from time to time small jets land there. Currently all hangars at the faculty are under contract to rent, and Fuller said there is room on the grounds to construct seven more.

Les Dungan with Dungan Engineering informed the Board of Supervisors that construction of the new Mississippi State University Extension Service facility is underway, and it is expected to be complete by the end of the year. The total cost to build the new facility will be $180,000 and it will constructed near the current National Guard Armory on Highway 26 in Poplarville. The building is being rebuilt because the previous facility burned in April of last year.

Under Dungan’s suggestion, the Board approved a motion to award a bid of $316,230 to Slocum Construction for the bridge replacement and paving of Shorty Burgess Road.

Countywide paving is a bit behind schedule. Dungan said about 45 percent of the planned roads in phase two of the countywide paving project are complete, partially because the project did not start until March of this year. There have also been issues with finding and repairing equipment this year due to supply shortages. So far this year about $2.6 million has been spent in the paving project, with $4 million still left to spend. Since the funding was obtained through a bond, he asked the Board for direction to utilize those funds before the time limit is up.

County Administrator Adrain Lumpkin said that normally a governing body has three years to spend a bond, but there are exceptions for extenuating circumstances.

In other road repair efforts, Dungan said a state aid project will repair all of the bad spots along George Ford Road, but the project will not repave the entirety of the road.

Dungan also asks local motorists to slow down when approaching road paving crews, since far too many cars have been seen speeding when passing those work areas.

Fire Marshal Jonathan Head informed the Board that a couple of fires occurred in Poplarville, but no fatalities were reported. The fires occurred at apartment building on McClendon Street and a shed caught fire on St. Charles Street.