Picayune receives $5,000 from SMPDD for installation of exit signs 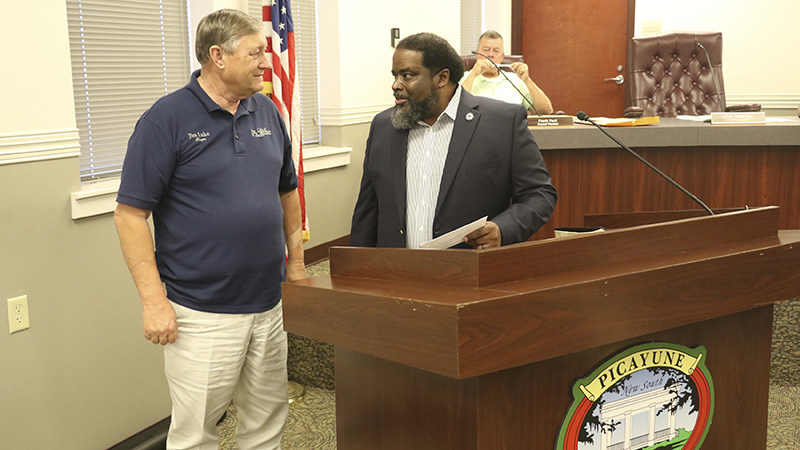 At left, Picayune Mayor Jim Luke listens to a presentation from District I Supervisor Donald Hart as he presents the city with a $5,000 check from the South Mississippi Planning and Development District. Photo by Jeremy Pittari

Luke said the Hilda Hoffman Memorial Archive was formed as part of her dying wish for her ancestry research be available to the public. The house where the archive is currently located, at 301 Williams Ave., was donated by Heather Alexander Clunie.

Also during that meeting, a $5,000 donation was made by the South Mississippi Planning and Development District to the city of Picayune for the construction of signs at two exits along Interstate 59 in the city. District I Supervisor Donald Hart presented that donation on behalf of SMPDD.

Grants Administrator Lisa Albritton said that $14,000 have been received so far in total donations toward that project. The total cost for both signs is estimated to be $80,000, said Public Works Director Eric Morris.

The signs will resemble the brick sign located to the entrance of Picayune coming north along Highway 43 South just before the intersection of East Canal Street.

Morris also gave an update on the Highway 11 widening project. He said the completion of punch list items in phase 1 should be complete this month, and right of way acquisition to move on to phase 2 is done. Work to move utilities as part of phase 2 sits at 75 percent complete.

Phase 2 will construct a new bridge across the East Hobolochitto Creek that is slated to include a pedestrian walkway. Morris said construction of phase 2 is slated to begin with bid letting in Oct. of 2023.

The grand opening of the Barking Lot across from Mildred Mitchell Park on Sycamore Road was heavily attended, Albritton said. She also took a moment to thank representatives with the Pearl River County SPCA for coming out to give a demonstration of how to properly use the amenities at the park. Those demonstrations were recorded, and uploaded to the organization’s Facebook account.

On Oct. 29, a Holloweenie contest will be held at the Barking Lot. That same day from 5 to 8 p.m., a Halloween event will be held at Crosby Commons where local businesses and community members will set up booths to hand out candy to children. Albritton said booth space is still available for that event.

The Mayor’s Youth Council will hold a teen Halloween event on Oct. 31, at Crosby Commons for children aged 13 to 19. Entry will be $5 and refreshments and will be available for purchase.

Parks and Recreation Director Trevor Adam informed the Council that a Midnight Madness softball tournament will be held at Friendship Park on Oct. 22. He expects thousands of teams to participate, brining tourism dollars from residents in states from Texas to Florida. Adam said the tournament was previously held in Slidell, but was moved to Picayune. He added that several people associated with the tournament have said they enjoy the amount of space available at Friendship Park.

Other efforts at the park will include prep work for the spring season of baseball and softball, steps to change the lighting at the tennis court to LED and repairing electrical issues at the soccer fields.