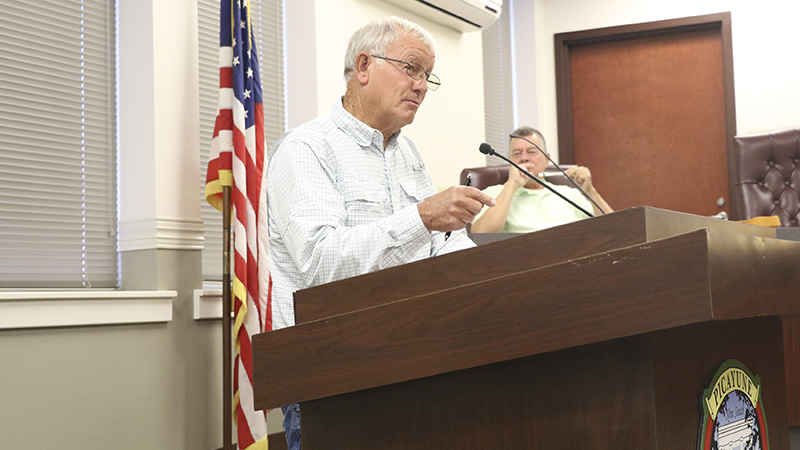 Efforts to improve operations at the Picayune Municipal Airport were shared with the City Council during the Oct. 4 meeting.

Airport Manager Wayne Wilson said work to repair lights at the airport was completed recently, but he is still having trouble with the electric gate when temperatures outside rise.

He also informed the Council that a representative with the Federal Aviation Administration is coming for a visit to talk about work that needs to be done and what kind of federal funding will be available.

An old dilapidated building that could be seen in a field while entering the airport was demolished, he said.

The Council also approved a motion to sell three warehouse buildings at a cost of $460,000 to Consolidated Aggregates. Interim City Manager Harvey Miller said the sale of the buildings will assist in the creation of 15 to 20 additional jobs in the city.

A new website being developed for the city will include new features, such as the ability to pay for building permits online. The new web hosting service will also come at a lower rate to the city, said City Clerk Sid Albritton.

Efforts to repair or replace water mains has also been underway. Public Works Director Eric Morris said three water main blow outs occurred recently while fire fighters were testing hydrants. The cause was due to the fragility of the remaining Transite water mains, of which only a few remain. The change in pressure during the test caused the old lines to blow and leak. Morris said that most of the old Transite pipe in the city have been replaced at this point, but some still remain. Each of those breaks cost the city about $1,500.

The Council also approved a motion to install a supervisory control and data acquisition system on the city’s water system. Devin Hedgepeth with Dungan Engineering said the system is capable of monitoring the city’s chlorine and fluoride levels. Morris said installation of this system will lessen the need for overtime in his department. Once installed, his staff will no longer need to personally inspect every well in the city to monitor those levels since that information will be transmitted remotely, negating the need for staff to go to each well on the weekends and holidays. If a problem does occur, Morris and his staff will receive alerts.