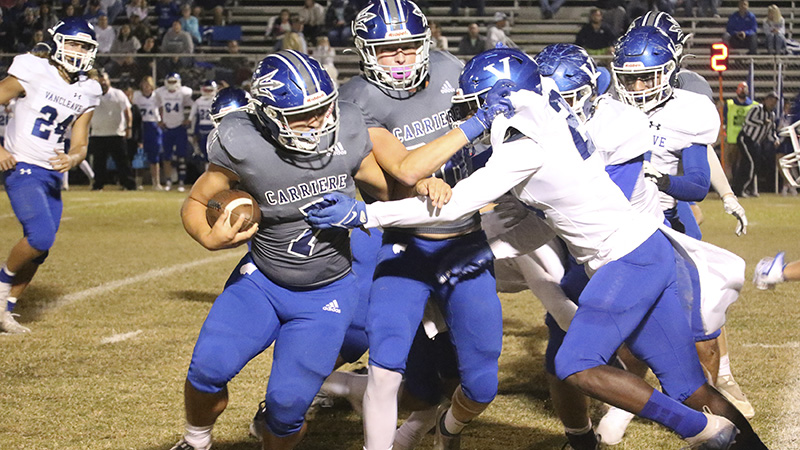 Vancleave’s Bulldogs earned another win this season, this time against Pearl River Central’s Blue Devils on PRC’s Senior Night. The final score was 44-17.

Pearl River Central held the lead for a brief period Friday night. In the first quarter, 12 plays and 80 yards later, B.J. Bellelo found the end zone from a yard out and Brody Marshall put the ball between the uprights with 5:46 remaining in the quarter.

The Bulldogs didn’t even need a drive to put points on the board. In the subsequent kickoff to Vancleave, Robert Tinson returned the ball for Vancleave’s first of many touchdowns on the night. With 5:36 still left on the clock in the first quarter, the score was 7-6 after Gavin Waltman’s PAT fell wide.

After a Blue Devils’ four and out, Vancleave used their next possession to take the lead when John Peterson crossed the end zone for the first of many that night. With 3:02 still on the clock in the first quarter, a two point conversion by Layton Eder put the score at 14-7.

Blue Devils kicker Brody Marshall shined with a successful field goal attempt when the team was fourth and long at the 18 yard line with 7:51 left in the second quarter, putting the score at 14-10.

When the Bulldogs took possession, two plays later Parker carried the ball for more than 35 yards to widen Vancleave’s lead to 21-10 with Waltman’s PAT. Just over seven minutes remained until the break.

Pearl River Central earned their last touchdown of the night in the their next possession in exciting fashion when Qorday Russell completed a pass to Tristian Williams from about 30 yards out. Williams caught the ball off a defensive tip that resulted in Williams having to juggle the ball until he gained control in the end zone. Marshall added his point to the current score of 21-17.

Vancleave’s lead widened just before the break. With only 17 seconds left to halftime a nine play drive covering more than 60 yards culminated in a touchdown when Parker crossed the end zone. With the PAT, the score was 28-17 going into the break.

Before the break, within those remaining 17 seconds, Vancleave widened the lead when two Blue Devils players tried to catch the kickoff, resulting in one of them touching it but not possessing it, allowing Aiden Hood to take possession of the now loose ball. A subsequent field goal by Waltman as the clock wound to zero put the score at 31-17.

The last two touchdowns of the game came in the fourth quarter, the first of which occurred with 11:21 left in the game when Peterson crossed the end zone from a yard out and the second came with 7:38 left to play an was also a Perterson touchdown, this time from 11 yards out.