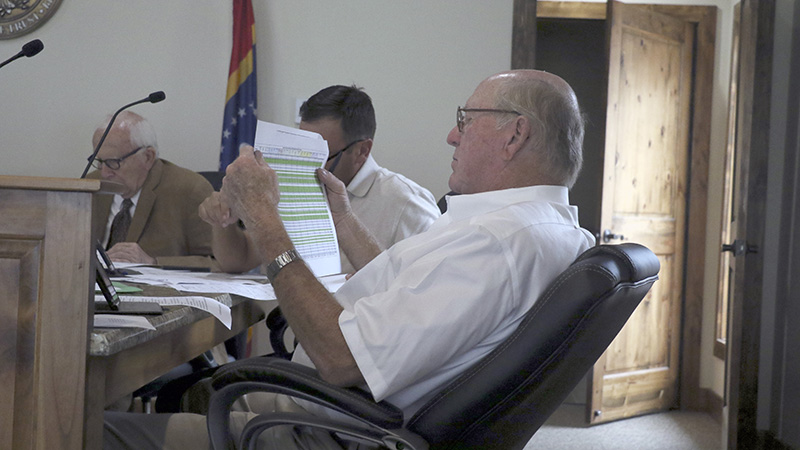 District III Supervisor Hudson Holliday reviews a list of completed roads as part of the Board of Supervisor’s phase 2 of the countywide paving project. Holliday also asked how soon petitions would be needed to put the dry status of the county on the Nov. ballot. Photo by Jeremy Pittari

Even though the state passed a law in 2021 effectively ending prohibition in all counties, it is still up to each county in Mississippi that was dry at that time to decide if they want to abandon those old laws.

But during Tuesday’s meeting of the Pearl River County Board of Supervisors, Holliday said efforts are underway to get enough signatures to put the matter back in the ballot countywide. Two of the most recent attempts were voted down by the voters, the most recent was back in 2006.

When Holliday asked Circuit Clerk Nance Stokes how soon she would need the required 1,500 certified signatures to get the matter on the ballot of the upcoming general election in November, said “next week.”

She said with absentee voting starting at the end of this month, she needs enough time to review the signatures and additional information requested on the petition to certify they are county residents who are registered to vote. Stokes said absentee voting starts 45 days before the election. The deadline to qualify for the offices featured on the upcoming ballot is this Friday, she said. Offices on that ballot will include chancery, circuit and county court judges, a seat on the school boards of Picayune and Pearl River County School Districts and a seat on the U.S. Congress.

If the proper number of signatures comes in after the deadline, it could cause the county to hold a special election in December or January. If that occurs, Stokes said her staff won’t be able to put precinct changes the Board approved into effect until after that election is held. The law states any petition that is certified with the proper number of registered voters has to be voted on within 60 days of certification.

Typically, the process to certify signatures starts with the petition being formed, then all signatures are submitted to Stokes’ office where her staff confirm signatures are from registered voters in this county. Recently, Stokes said her office has received petitions aiming to reverse the county’s decision to not allow the growing and distribution of medical marijuana. Her staff has found that most of the signatures on that petition can’t be certified, either due to a lack of information or because the signature is too sloppy. Typical petitions ask the person for not only their signature, but their precinct, address and to print their name. Stokes and Holliday said far too many people do not fill out a petition properly.

Of all the signatures her office has received concerning the medical marijuana decision, only 400 could be certified, Stokes said.

Pearl River County Economic Development District  Director Lindsay Ward said a leakage survey conducted last year determined residents in this county spend about $5.7 million on liquor, all of which was purchased in other areas because this county is dry. Additionally, companies looking for a place to locate look at how restrictive the laws are before even approaching city or county representatives with proposed projects.

No decision was made on the matter but it was suggested that if the signatures are not received in time, the petitions can be held and submitted at a later date to put the matter on the Aug. 2023 ballot.