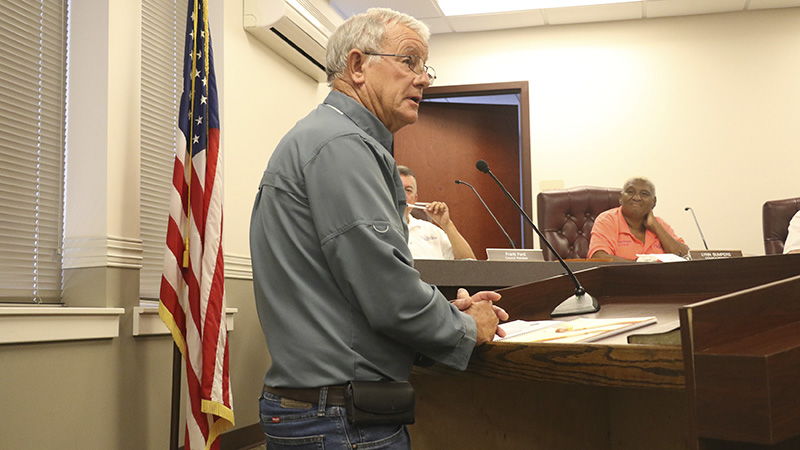 Wayne Wilson was introduced as the city of Picayune’s new airport manager during the Sept. 6 meeting of the City Council. Photo by Jeremy Pittari

Updates concerning ongoing projects and efforts by city employees were provided to the Picayune City Council during the Sept. 6, meeting.

Police Chief Joe Quave said his department responded to 1,151 calls for service since the Council’s previous meeting. In that three week period, officers conducted 26 arrests of which 12 were for felony offenses.

The department’s volunteer group, Citizens on Patrol, is set to have a booth at the upcoming fall Street Festival to do some recruiting. Quave said his department is also bringing back the Explorer Program, which is for juveniles.

While Citizens on Patrol is currently without a patrol vehicle, Quave said that when the new vehicles the city plans to purchase arrive, that volunteer group will be provided with one of the older patrol vehicles.

Fire Chief Pat Weaver said his personnel responded to 54 calls for service in the previous three weeks, of which 23 were medical, four were for fires and nine were for vehicle collisions, of which two involved injuries.

Firefighters also flow tested 100 fire hydrants in the city and sent a trailer full of bottled water to the residents in Jackson.

Public Works Director Eric Morris said his personnel completed the installation of dedication plaques at Friendship Park, cut grass on the east side of the city and identified areas in the city where vehicles should not be parked.

The installation of amenities at the Barking Lot, the city’s new dog park located next to Mildred Mitchell Park on Sycamore Road, have been completed. The plan is to open the park to the public on Oct. 3.

The grass in the median of the first phase of Highway 11 was also finally cut by MDOT contractors.

Morris said there are plans to work on drainage issues on Merrydale Drive and Martin Luther King Jr. Road.

Planning and Development Director Diane Miller said during the month of August, 16 building permits were issued in the city, bringing in a total of $16,600 in fees. She added that Lester’s Seafood should open soon. That business will be located where Don’s Seafood was located at the intersection of Highway 11 and Bruce Street.

Parks and Recreation Director Trevor Adam said baby swings have been installed at J.P. Johnson Park and Mildred Mitchell Park and his department accepted the donation of a memorial bench from Michelle Ladner. Adam said he is also looking into seating by the splash pad at Friendship Park.

In other business, Wayne Wilson was also introduced as the city’s new airport manager after the retirement of Andy Greenwood.