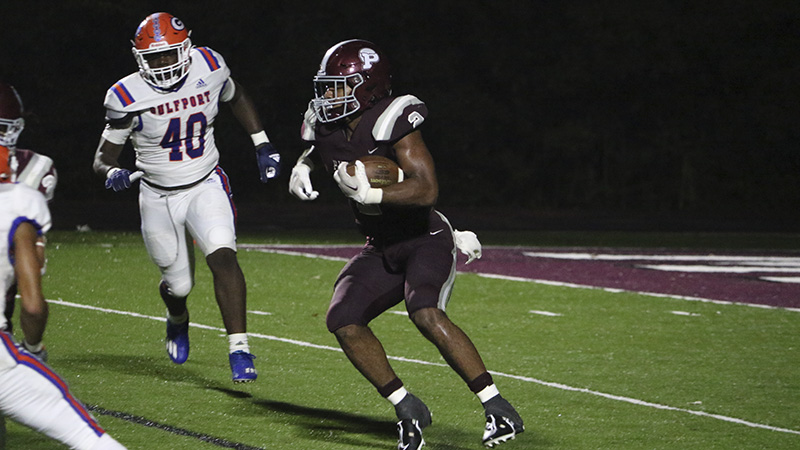 Dante Dowdell looks for room to advance in the Maroon Tide's 21-7 win over the Admirals Friday night. Photo by Jeremy Pittari

The Maroon Tide flooded the Admirals in Friday’s matchup 21-7.

The first quarter of the game was a back and forth affair, with both defenses preventing any player from reaching the end zone. However, the Maroon Tide put points on the board in the second quarter with 6:12 left to play through a 64 yard drive in seven plays. From the Admiral’s three yard line, Maroon Tide running back Dante Dowdell reached pay dirt. Morgan Craft’s PAT attempt was successful, resulting in a 7-0 lead for Picayune.

The lead on the night could have been wider, but in the closing minutes of the second quarter a touchdown pass from Maroon Tide quarterback Brady Robertson to Chris Davis with 1:21 before the break was called back because Davis stepped out of bounds before reentering the playfield and catching the ball.

In the third quarter, the Maroon Tide picked up another touchdown with 4:21 left to play in the third when Davis carried the ball from the Admiral’s 33 yard line to the end zone. Craft’s PAT put the score at 14-0.

The final touchdown by the Maroon Tide occurred in the fourth quarter with 6:19 remaining to play when Davis carried the ball for a 37-yard touchdown. Craft’s PAT put the score at 21-0.

The Admirals almost suffered a shutout loss, but with 3:49 left in the game, Jacob Palazzo carried the ball ten yards to pay dirt. Yeferson Lazo’s PAT put the final score at 21-7

“I thought we actually put together a full game tonight. Our defense was spectacular. That one touchdown, you know, whatever. That was a good defense we went against, but we fought hard,” said Maroon Tide Head Coach Cody Stogner.

“I tip my hat to our defense, they are pretty special, they kept us in the game and we finally got something working on offense where we could get in the end zone a couple times.”