Lake project may get push from economic development director 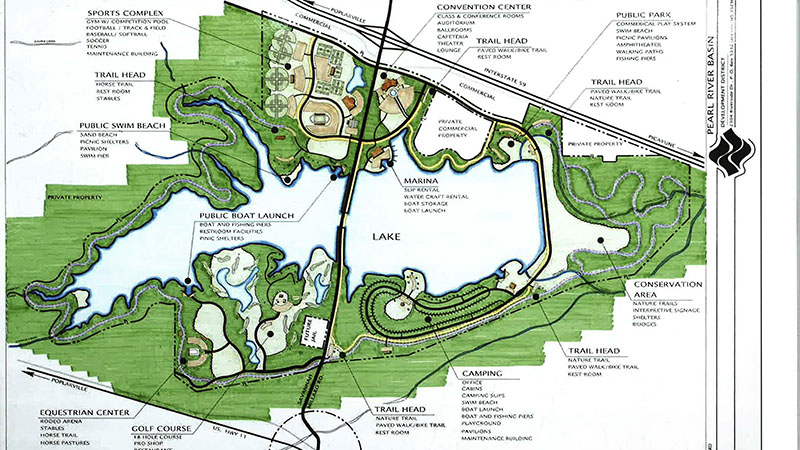 Efforts to construct the lake project set to be constructed in the middle part of Pearl River County may get a shot in the arm.

During the last Board of Supervisors meeting, District III Supervisor Hudson Holliday asked Pearl River County Economic Development District Director Lindsay Ward to follow up on that project, which has lost some steam over the past year. Holliday said the county spent a lot of money on getting the project where it is, which included a study by the University of Southern Mississippi’s Trent Lott National Center for Excellence in Economic Development and a conceptual plan designed by Dungan Engineering. The project has been in discussions since about 2000, according to previous coverage. It is proposed to be about 900 acres and plans indicate it will include recreation aspects such as camping. Attempts to get the required permits from the Corps of Engineers have so far been unsuccessful, previous coverage states. Previous estimates show the project would cost about $10 million, and any effort to apply for grants or other funding is not possible without the permit.

A public hearing on a property was also held during the Aug. 17 meeting, during which Code Enforcement Officer Kolby Davis brought an issue at a property located at 212 Old Creek Road before the Board. On the property is a fire damaged trailer that has been there for at least four years in its current state. Davis said neighbors have been keeping the lawn mowed and at one time children were said to have been playing in the dilapidated structure, but trees now grow in the center. Davis informed the Board that he has had a hard time locating the owner. As such the county will likely have to demolish the trailer.

Holliday and District II Supervisor Malcolm Perry agreed that the property needs to be cleaned and the cost of that work put on the taxes as a lien. The Board approved a motion to advertise for bids and award the project to the lowest bidder.

The Board also heard from Byron Hill with Mississippi Power Company, who said the power company plans to upgrade the lighting at the Carriere walking track to LED systems. There are also plans to install lights at the Interstate 59 exit ramps at Poplarville. Hill said the estimated cost to install those lights will be $120,000 and monthly costs to keep them lit is estimated to be $3,000.

The Board also held a public hearing to abandon a section of road along Dumas Bailey Road. While no one came to the hearing to make a comment, it was said by the Board that the section of road entails about 3,524 feet of roadway. After approving a motion to abandon that section of the road, the Board asked the Road Department to install a sign at that point stating “End of county maintenance.”