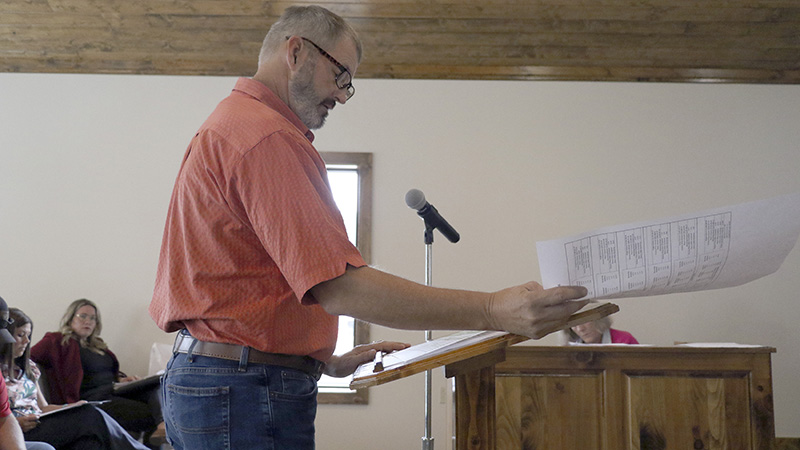 Les Dungan with Dungan Engineering provides an update on the second phase of the county-wide paving project. He said that about 40 miles of road still need to be paved. Photo by Jeremy Pittari

The housing market in Pearl River County is still doing well, according to information shared during the most recent Board of Supervisors meeting.

Code Enforcement Officer Kolby Davis said last year there were 256 new homes built in the county. This year as of August, Davis said 277 houses have been built and he expects that total to reach 300 by year’s end.

Board President Sandy Kane Smith said he has heard that a lot of people are moving to this county from Louisiana due to a lack of access to flood insurance.

The Board also heard an update concerning a piece of property located at 28 Hunters Trace. During a recent property public hearing, Davis showed pictures of the property that included cars being worked on in the driveway and piles of various items in the yard.

Davis’ update showed that some efforts are being made by the property owners to make the property more presentable, but there is still work to do. He said the vehicle once being worked on has been moved further from the road, and the various items have been condensed into one spot. However, septic tank leak is ongoing, which could be due to a problem with the grinder pump. Davis is concerned that since the adjacent house is up for sale, the sewage flowing toward that property potential owners of the home will want that problem addressed. Due to the need for more cleanup and repairs to ongoing leak from the septic tank, the Board decided to revisit the matter during the Sept. 21 meeting.

The Board also heard an update concerning rebuilding the fire damaged Nicholson Volunteer Fire Department station and truck bay located on Jackson Landing Road. It was damaged when a fire truck parked in the structure caught fire. County Administrator Adrain Lumpkin said the process to rebuild the station will entail taking down the entire steel building, and hopefully using the existing concrete slab. If repairs are needed to the slab, he anticipates those repairs will be localized to the spot where the truck that caught fire was parked. The insurance company is expected to pay the county $192,000, but Lumpkin said the lowest estimate he got to replace the building was $206,000. Replacing the damaged fire truck will be a harder process. Emergency Operations Director Shawn Wise said he was informed orders for new fire trucks are taking 24 to 36 months to be filled.

The new building will be a prefabricated metal building like the old one, and the plan is to use the same bolt patterns as the current structure.