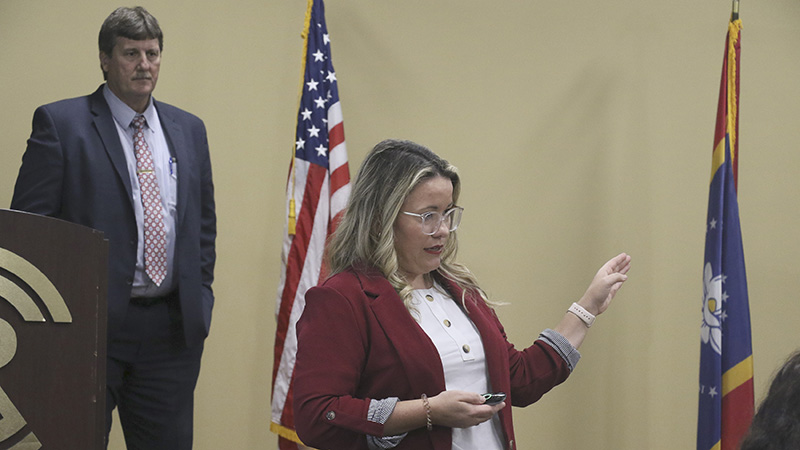 During the most recent iteration of Pearl River Community College’s Lunch and Learn held Wednesday, attendees heard about several projects that are underway or planned that will improve the county and increase economic development.

Projects covered included the expansion of sewer service to exit 10 from the city of Picayune, industrial parks in Poplarville and Picayune and a new Emergency Operations Center with future additions to add a multipurpose center.

To kick off the presentation, County Administrator Adrain Lumpkin and Pearl River County Economic Development District Director Lindsay Ward began by covering the recent Census data. Estimates show the participation rate in this county for that Census was only 60 percent, so the population numbers reported are more than likely inaccurate.

Population numbers affect the amount of funding provided by the Federal government, and also affect district lines. Due to shifts in the population, the Pearl River County Board of Supervisors had to redraw district lines to ensure the residents are properly represented by elected officials. Some changes to District I, the minority district formed as a result of a lawsuit filed in the early 1990s, also occurred. Due to the new district lines, many voters in Pearl River County may have been put in a new district, as a result new voting cards will be mailed out by the Circuit Clerk’s office in January of 2023.

American Rescue Act funds are being used to expand sewer service from the city of Picayune up to exit 10 along Interstate 59. Ward said there are three to four lots in that area that will benefit from the infrastructure, making them prime land to develop.

As part of the county’s 10 year strategic plan, there is a focus on site development to attract industrial and commercial entities. Ward said she is also working with PRCC to develop programs that can meet the needs of local employers.

There is also a focus on keeping existing businesses and industries since it is easier and cheaper to keep them on in this county rather than attracting new ones.

Lumpkin said there are a few pieces of land in the industrial parks, but Picayune’s remaining one is mostly in a wetland, making the 12.8 acres there inaccessible.

Near the Picayune Municipal Airport is another 28 acres set aside for a technology park. Lumpkin presented plans for a development that is slated to bring in high paying jobs.

Another industrial park was purchased in Poplarville using Gulf Coast Restoration funds totaling $2 million, of which the county paid $400,000 as part of the required match. The 130 acre site is on Highway 26 near the Love’s Travel Stop. Ward said a ground breaking for that site will be held soon.

The availability of GCRF grants will create a number of opportunities to bring the county forward over the next 12 years, Lumpkin said. Plans to use those funds are focused on the long term effects the project will have.

An upcoming project that is expected to take place over several years will construct a new Emergency Operations Center and future additions to the facility will include a multipurpose center. Ward and Lumpkin said the multipurpose center will allow for larger events to be held here, attracting more tourism and bringing in more tax dollars. The most recent county fair brought in more than $100,000 at the fairgrounds alone, not counting any residual purchases made at businesses in Poplarville.

With the increase in economic development, there is the potential to attract the construction of a hotel in the Poplarville area. However, there have been some hurdles in some of the planned growth, number one of which is the current price of land, especially from private owners. Lumpkin said that is why the county purchasing land for development is so important.