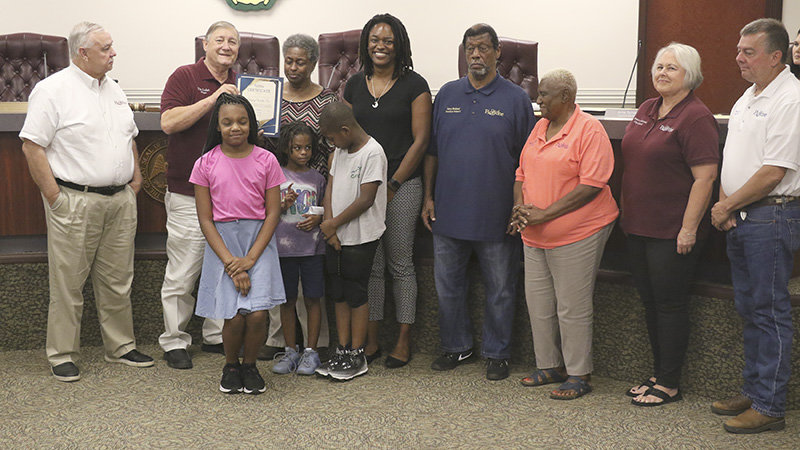 The family of Greg Wall Sr. was presented with a certificate of appreciation for his many contributions to the community during Tuesday’s City Council meeting. Photo by Jeremy Pittari

During Tuesday’s meeting of the Picayune City Council, a motion was approved to discuss a contractual matter in closed session.

When asked, city attorney Nathan Farmer said the matter was being discussed in closed session because it fell under clause (4)(l) , which states “Discussions regarding material or data exempt from the Mississippi Public Records Act of 1983 pursuant to Section 25-11-121.”

He further said that the matter fell under Miss. Code Am 25-61-9 of the Mississippi Public Records Act of 1983, which states “provides that records furnished to public bodies by third parties which contain trade secrets or confidential commercial or financial information shall not be subject to inspection, examination, copying or reproduction until notice to the third parties has been given, but such records shall be released within a reasonable period of time unless the third parties obtain a court order protecting such records as confidential.”

Farmer said the Council did not enter executive session, and no motion was made on the contractual matter after returning to open session.

However, the Council did approve a motion to appoint Harvey Miller as the city’s interim city manager after returning to open session from the closed session.

Also during the meeting, the Council presented the family of the late Greg Wall Sr., with a certificate of appreciation for his many contributions to the community.

Wall was described as a star athlete in his youth, a championship coach, a NASA retiree and Picayune School Board of Trustees president. Harvey Miller said he was proud to have been around and learn from Wall during his life. Councilor Larry Breland said Wall was loved by many, especially the children he worked with as a coach. Breland added that Wall did a good job when he served as Pleasant Valley Baptist Church’s associate minister.

Mayor Jim Luke said he worked with Wall in several capacities, including at the ammo plant at Stennis Space Center, through the school district and Wall even helped Luke clean up his yard after Hurricane Katrina.