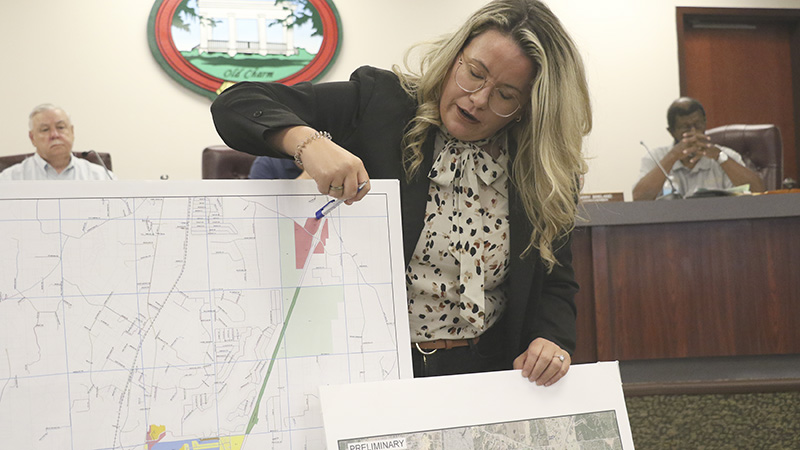 Pearl River County Economic Development District Director Lindsay Ward shows the placement of four pieces of property that would be prime fro development at exit 10 in Carriere after the city of Picayune extends sewer service to that area. Photo by Jeremy Pittari

Pearl River County Economic Development District Director Lindsay Ward said the project will be mostly funded by American Recovery Act Grant funds. The total cost of the project is estimated to be $2.5 million.

The project will extend a sewer main from exit 6 in Picayune north along Interstate 59 to exit 10, which is the northern border of the city limits.

During Tuesday’s meeting, the Council approved several motions to apply for additional grant funding to help offset the cost of the project.

If all of the grant applications area approved, Ward said the city’s portion would only be $300,000. The county will provide $1 million in ARPA funds to help pay for the project.

The project will build five miles of eight inch force main and a pump station at the Carriere exit, effectively making the area more enticing to potential business or industry owners who may consider moving to this area.

The Council also accepted donations from area businesses and organizations to help offset the cost of the decorative signs slated to be installed at the entrances to the city from Interstate 59. Picayune Main Street Inc. donated $5,000, while every business within the Top of the Hill shopping center at exit 6 donated money, totaling $3,100.

City Clerk Sid Albritton said the donations will be put into a separate account and be used in the construction of those signs.

The Council also approved a motion to enter into an engineering agreement with Dungan Engineering to upgrade the HVAC system on the historic side of City Hall. Public Works Director Eric Morris said the system is antiquated and difficult to switch from heating to cooling. The inconvenience invovles someone having to go outside the building to make the switch, which means both floors of the building are set to either heat or cool since the system can’t do both at the same time.

Morris said the expense was already budgeted for this fiscal year.