Baseball coach asks School Board to assist with field improvements 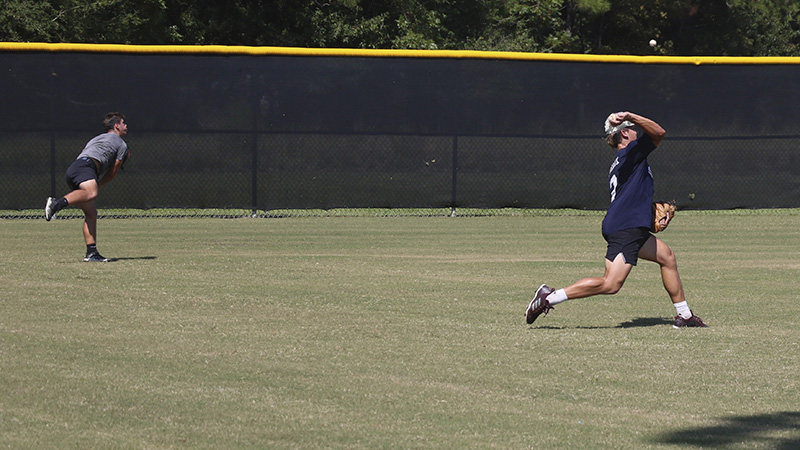 Members of the Maroon Tide baseball team warm up during practice Tuesday afternoon. Evan Nichelson, the team’s head coach, asked the Picayune School District’s Board of Trustees to assist in performing several improvements to the baseball field. Photo by Jeremy Pittari

Head Baseball Coach Evan Nichelson presented the Picayune School District’s Board of Trustees with some field improvements he would like to conduct during the Board’s Sept. 13, meeting.

During his presentation, he gave the Board two proposals, the first of which is estimated to cost $144,963 while the second had an estimated cost of $135,408.

The only difference between the two proposals was the total number of new seats he wanted to add to the varsity baseball field.

Both proposals include installation of concrete around the dugouts and backstop and near the concession stands where it regularly gets muddy, construction of a three-foot high brick backstop from dugout to dugout and making the home dugout deeper. Nichelson said the current size of the dugout is too small.

He also requested a new storage shed so some of the team’s equipment can be stored outside of the clubhouse and still be out of the weather, such as the recently purchased $10,000 pitching machine.

The major difference between the two proposals was the number of new seating he is requesting. In the first, more expensive proposal, 100 chairs are included. The less expensive proposal includes 60 chairs. Sponsors of a chair will be given free admission for the home games during the season. Sponsorships are proposed to cost between $100 and $200 per chair, depending on how many seats are installed.

When asked which proposal Nichelson likes best, he chose the less expensive option because it leaves more space around the concession stand.

Nichelson said that the players can help offset the cost of the new seating by selling the sponsorships. If each player sold two chairs, under either proposal, they could raise about $18,000 per season.

He gave two ideas on how to fund the project, the first is to pay off the current loan of $72,000 on the new building being retired by the team’s booster club and asking the booster club to take out a new loan.

District Finance Director Micah Necaise suggested keeping the current loan the booster club is paying on because interest rates went up since that loan was taken out. Necaise estimates it would take about 7 years to pay off the loan for the proposed project if $18,000 is raised each season.

At the end of the discussion, Board member David Mooneyhan asked Necaise to see if the district can fund the improvements with the current budget and bring that information to the next meeting.

Also during Tuesday’s meeting, the Board was introduced to members of the city’s Mayor’s Youth Council. Mayor Jim Luke said the new youth organization was formed so the city’s upcoming leaders can learn how government works, how courts operate and become versed in citizenship. This year the organization includes about 18 students, but the plan is to increase that number in subsequent years.

The Youth Council will also be tasked with putting together youth focused events, such as an upcoming Halloween themed event geared toward teens set to be held at Crosby Commons on Oct. 31, from 6 to 8 p.m.