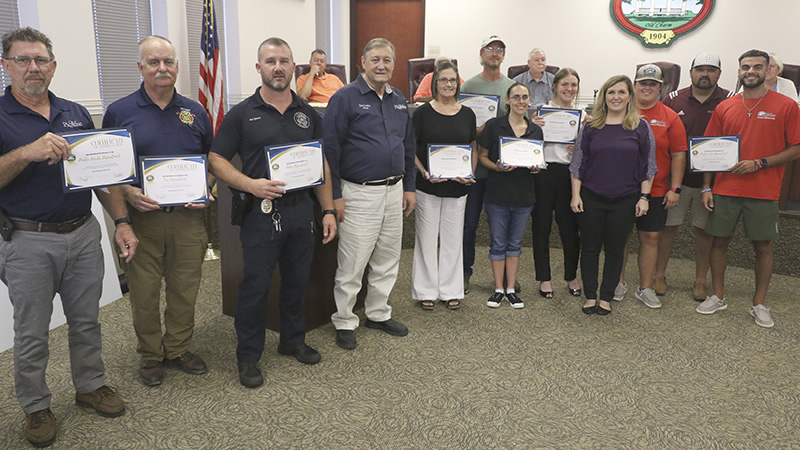 A number of city employees, community members and business leaders were recognized for their efforts to make a summer movie series held at local parks a success. Photo by Jeremy Pittari

Over the summer, the city of Picayune hosted three movie nights at two parks to give families something to do outside.

Two of the events were held at Crosby Commons, while the third was held at Friendship Park on the Fourth of July and featured a fireworks show.

Special Projects Director Lisa Albritton said the events would not have been a success without the help of several volunteers, city employees and emergency responders.

Some of the volunteers included personnel from the Picayune School District, Public Works, Police Department, Fire Department and Parks and Recreation. The presence of the firefighters was especially appreciated on July 4, since some random people decided to bring their own fireworks.

In other business the Council heard about efforts of city employees. Fire Chief Pat Weaver said that over the course of Aug. 2 to Aug. 16, firefighters responded to 40 calls, 19 of which were medical, 9 involved collisions of which five included injuries and there was a fire in a freight truck.

Police Chief Joe Quave said officers responded to 880 calls for service and conducted 30 arrests, 14 of which were for felony offenses.

Picayune Main Street Inc. Director Reba Beebe said a new Christmas ornament has been chosen for this coming holiday season. Each year the non profit organization devises and sells a Christmas ornament that celebrates the history of the city. This year’s ornament features the front of the old Crosby Memorial Hospital. They will be sold at various local businesses and are also offered inside the Picayune Main Street office located in the Intramural Transportation Center on Highway 11.