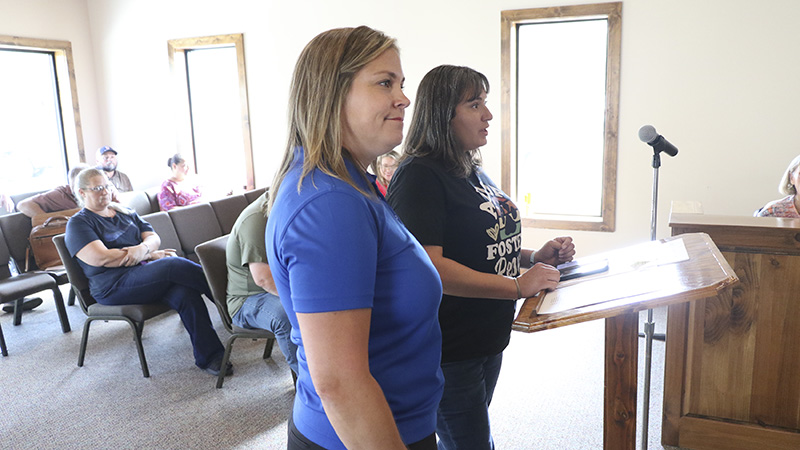 From left, Pearl River County SPCA Treasurer Lauren Fitts and Shelter Director Elizabeth Treadaway address the Board of Supervisors about the work and needs of the local animal shelter during Wednesday’s meeting. Photo by Jeremy Pittari

An update on the operations at the Pearl River County SPCA was provided to the Board of Supervisors during Wednesday’s meeting.

PRC SPCA Treasurer Lauren Fitts said the shelter was run by the city of Picayune until about 1998 when the Friends of PRCSPCA was formed. Currently the shelter employs bout 19 people and has a starting wage of $10 per hour.  A recent pay increase to ensure qualified people are employed there also increased the shelter’s operation budget, now at about $750,000 annually, Fitts said. There are also 15 to 20 volunteers who help out around the shelter.

Some of the services the shelter offers other than pet adoptions include a pet food pantry, low cost spay and neuter program and an intake diversion program to help those who may consider surrendering their pet. The intake diversion program works to solve the issues people are having with caring for a pet. Most of the time pets are surrendered because of pet behavior or cost, said Shelter Director Elizabeth Treadaway.

Renovations to the building next to the shelter, which was previously a satellite fire station, will create a clinic where a volunteer veterinarian can conduct pet care such as spay and neuter procedures.

Treadaway said the shelter typically spends about $200 per animal before it is adopted, averaging about $8 per day. That includes spaying/neutering, vaccinations and micro-chipping.

To help cover the costs of operating the shelter, a monthly yard sale is held at the shelter, which typically raises between $800 to $1,200.

Both representatives of the shelter said the facility needs all the help it can get to ensure it’s going in the right direction.