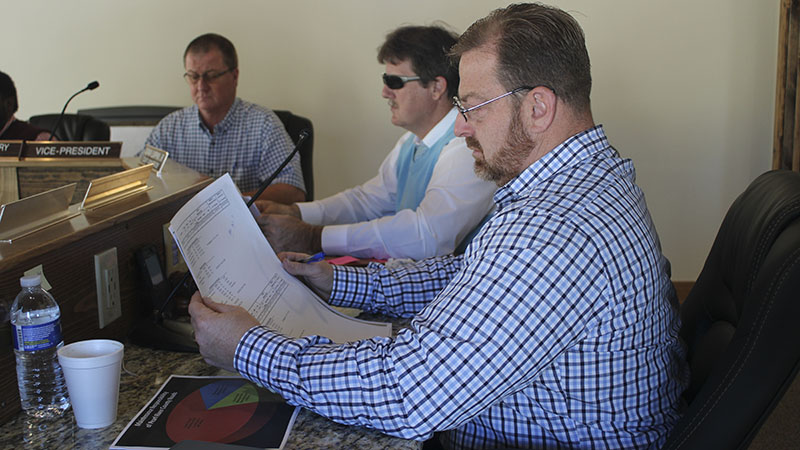 Board of Supervisors President Sandy Kane Smith reviews a sample cost estimate for repairing two county roads. The Board is considering a project to double the number of roads paved in the county.

Some increases were made to a proposed budget the Pearl River County Board of Supervisors discussed during a budget workshop held on Tuesday.

Even with those increases, County Administrator Adrain Lumpkin said he does not expect a need to increase ad valorem taxes to residents. The budget discussed was not final and will be discussed further at a public hearing set for Sept. 6.

Some of those increases will be given to departments to cover raises, or requests for more funding.

Increases were also made for the Sheriff’s Department. Lumpkin said Sheriff David Allison requested an additional $300,000 in his two main budget line items, specifically the jail and administration.

While Lumpkin was not able to provide the total increases requested, he said he was able to provide the administration at the Sheriff’s Department with an additional $100,000, bringing that total budget to $3.2 million and the jail received and additional $145,000, bringing that budget to $3.2 million. If every request for increases was approved, the Board of Supervisors would be forced to increase taxes, he said.

The Sheriff’s Department is also waiting on about $300,000 in drug seizure funds to be turned over for use by the department. Lumpkin suggested Allison use those funds to replace vehicles in his fleet.

While the funds can be used to hire more deputies, Lumpkin said the federal government will track that usage of the funds and any deputy paid with those funds would be unable to work drug seizure related cases to avoid a conflict of interest.

Lumpkin also asked the Board to consider allowing him to hire an additional person within his office since the existing ones are reaching retirement age. He added that when he took the job as county administrator 20 years ago, the county had 150 employees. Today, there are about 400.

Internet sales tax collections are helping with funding road maintenance. Lumpkin said that he expects the total collected annually to peak at about $1 million and added that the change has been the biggest increase in road and bridge funding in the last 20 years.

A public hearing on the budget will be held on Sept. 6. during the Board’s regular meeting. The meeting starts at 9 a.m.