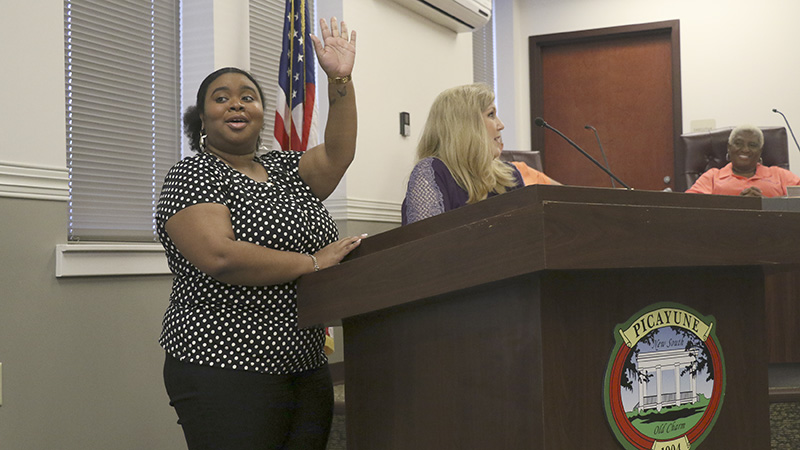 At left, Sydney Stubbs was introduced by Lisa Albritton, at right, as the city of Picayune’s new Keep Picayune Beautiful director during Tuesday’s meeting of the City Council. Photo by Jeremy Pittari

Picayune’s City Council approved a new contract with Coastal Environmental Services for waste pickup, with a reduction in services due to increasing costs to the city.

The only service being cut includes curbside recycling, but the change to the contract also puts pickup of green debris such as limbs and leaves on city employees instead of Coastal Environmental, who submitted the lowest and best bid.

The bid approved by the Council totaled $80,070 per month for twice weekly pickup of household waste only. Other bids received for the same service included $105,272 from Waste Pro of Mississippi and $111,095 from Waste Management.

Several options were also included in the bids to add additional services, such as recycling and green debris pickup.

For rubbish and yard debris pickup once weekly Coastal Environmental bid a monthly cost of $17,000 and Waste Pro bid $32,257. Waste Management did not submit a bid for debris pickup.

For recycling services, there were two options, curbside recycling or four satellite stations set up throughout the city.

City Clerk Sid Albritton said the city is currently paying Coastal Environmental $78,800 per month for all three services, equating to a charge to the city of $18.56 per household. Under the new contract, the city will pay $18.84 per household, or $80,070 per month just for household garbage pickup. Each household is currently charged $20.85 for that service. The difference is used to cover the city’s administrative expenses, Albritton said. Since several fuel adjustment increases have been made to the current contract over the years, the city has been collecting less and less in administrative fees since a rate increase was not put into effect to residents. As a result, Albritton expects the Council to consider a rate increase to residents in the next couple of months.

To keep the cost to residents down, the Council made the decision to not keep a recycling program in the city for the time being, and move debris removal to the Public Works Department, Albritton said.

Only about 10 percent of the city’s households were participating in the recycling program, Albritton said, meaning the rest of the residents were paying into a program they did not use.

In other business, Public Works Director Eric Morris addressed the Council about debris pickup, and shared some concerns about how residents participate in that program. Morris said the green waste program is supposed to apply only to limbs, leaves, pinestraw and trees smaller than 8 inches in diameter. However, some residents have been putting construction debris, old fences, the contents of a house and other items not suited for the equipment used to collect the green waste at the curb. Morris asked the Council to consider allowing each resident only one “freebie” for the first offense and be added to a list kept within Public Works so subsequent offenses will result in the inappropriate debris being left at the curb. Those residents will be provided with a door hanger describing why the debris was left behind. No action was taken on that matter during Tuesday’s meeting.