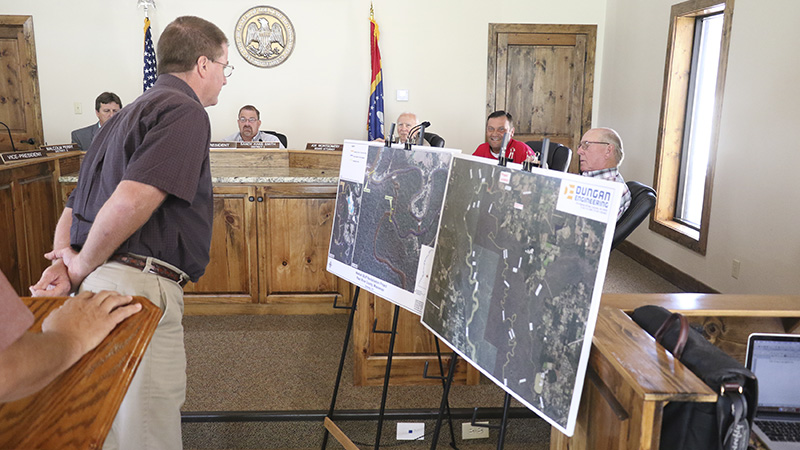 District II Supervisors Malcolm Perry reviews engineering images that outline plans to repair the weir along the Pearl River at Wilson’s Slough. The current failure of the weir has caused water flow along the east side of the river to drop significantly. Photo by Jeremy Pittari

A public hearing was held on Aug. 17, where the Pearl River County Board of Supervisors outlined the plan to repair the weir at Wilson Slough.

While no one came to provide comment on the plan, Les Dungan with Dungan Engineering did take a moment to outline the planned efforts to ensure 50 percent of the flow along the Pearl River reaches the east branch and briefly outlined plans to repair the damage.

The presentation began with some history of the weir. Dungan said the weir was constructed in the late 1990s with the intention of ensuring the East Pearl River got 50 percent of the flow while the other 50 percent went to the Bogue Chitto River.

At one point, 100 percent of the flow headed toward the Bogue Chitto River, leaving 18 miles of a dry river bed on the East Pearl River, which is why the weir was built.

In 2004, the Corps of Engineers conducted repairs on the structure. A year later, erosion could be seen along the rip rap in the area.

That erosion continued to get worse through the years until in 2010 part of the sheet wall was exposed due to the rip rap being taken away by the flow. By 2019, the wall could be seen on the up stream and down stream sides of the structure and the wall began to lean.

Now in 2022, all of the rip rap is gone, the wall leans even more and the majority of the flow once again goes toward the Bogue Chitto River.

Dungan said that part of the problem is the slope from the Pearl River to the Bogue Chitto involves a five foot drop, increasing the velocity of the water as it heads towards Louisiana. The problem is compounded with the fact that the slope occurs over several hundred feet instead of miles as is typical in rivers.

The plan is to apply for the national permit in the middle of September and the scope of work planned is simply to restore what the Corps of Engineers constructed back in the late 90s.