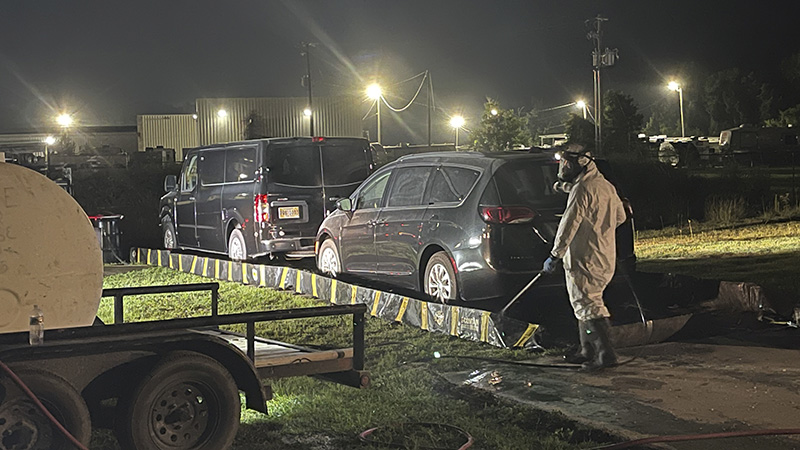 Personnel with the Mississippi Department of Environmental Quality clean up a chemical that was released last week. Submitted photo

Friday morning, members of the Pearl River County Emergency Operations Center were alerted to some sort of chemical being released from a business in Picayune’s Industrial Park after two employees of an adjacent business suffered from respiratory distress.

PRC EOC Director Shawn Wise said the chemical in question is described as a dry material called magnesium silicate. Two people at a nearby funeral home were affected by the incident and taken to the hospital for treatment. Wise said both individuals were treated and released from the hospital.

Adam Bennett with Dignity Services said he and another coworker said the chemicals covered the building they work in and caused both of them to suffer from respiratory issues. After being treated at the hospital they are now doing fine, he said.

Bennett said he called the Mississippi Department of Environmental Quality to report the incident. Wise said MDEQ responded to determine the best way to dispose of the substance. Wise said an investigation determined the chemical came from Heritage Plastics, but it is still unclear how the chemical was released.

MDEQ continues to investigate the incident and has assigned two teams to the case, one to monitor the air and another to cleanup the substance, Wise said.