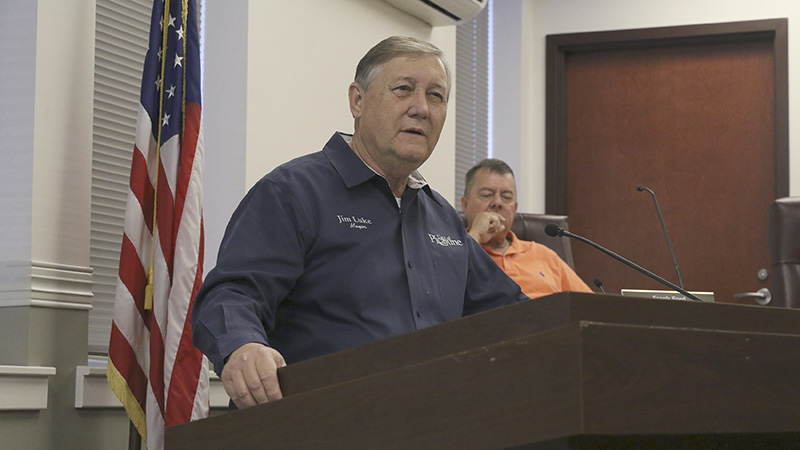 Picayune Mayor Jim Luke addresses the crowd during Tuesday's City Council meeting to clarify that he notified the city's trial attorney that the son of a Councilor had been selected to serve on a jury of a trial in which the city was involved. Photo by Jeremy Pittari

Mayor Jim Luke clarified during Tuesday’s City Council meeting that he knew the son of a Councilor had been selected to serve on a jury of a case involving the city and corrected previous coverage by the Item that stated no one reported that fact.

Luke said that he, Councilor Larry Breland and several others informed their legal representation that Lorenzo Breland was in the jury pool, and informed him again after Lorenzo was selected to serve on that jury.

He gave that update after reading a line from a story published by the Item on Saturday that stated he and Councilor Larry Breland “failed to report that the Councilor’s son had been selected to serve on that jury.”

Luke said there were numerous times that people reported to the city’s trial attorney that Lorenzo Breland was not only in the jury pool, but had also been selected for that jury.

“I can’t speak to why they chose to leave him on,” Luke said.

Luke added that it was not “like I could jump out of my seat and say to the judge that ‘Lorenzo Breland is out there.'”

The city’s trial attorney was identified as Ed Hatten with Dukes Dukes Keating and Faneca P.A., by city attorney Nathan Farmer. Farmer said that Luke was at the table with Hatten during the jury selection process, and that Luke informed Hatten of Lorenzo’s presence.

“It was communicated to our trial attorney,” Farmer said.

Luke added that the city plans to appeal the Aug. 11 decision from 15th Circuit Court Judge Anthony Mozingo for the city to pay Landry Lewis Germany Architects P.A. $210,000 in damages for the mistrial that ensued after the judge was notified Lorenzo Breland was on the jury. The effort to appeal Mozingo’s decision will be taken all the way to the Supreme Court, Luke said. He added that he intends to”put the attorneys that represented us on notice.”

Luke then said that he will ignore the “self-centered critics” and continue to move the city forward, after which he cited the city’s construction of a dog park, and efforts to beautify exits along Interstate 59.

The Item reached out to Luke on Friday for comment about the Aug. 11 decision, but was referred to Farmer for comment, who did not respond by press time on Friday. Luke said he wanted to wait until the Council meeting on Tuesday so he could use the city’s live feed on social media.