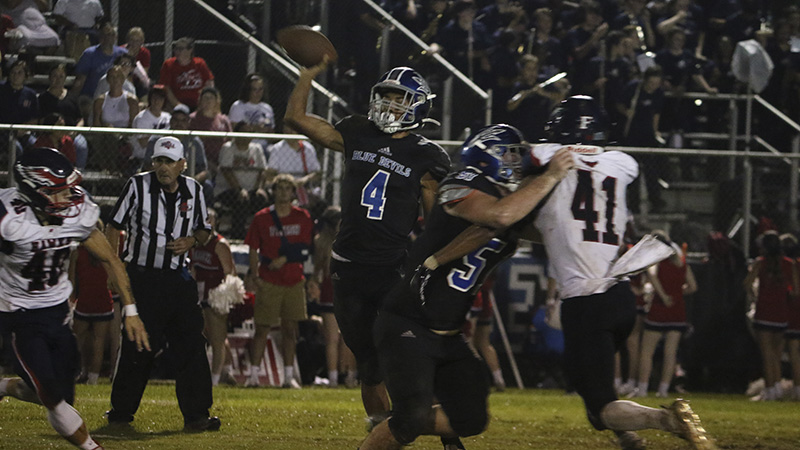 Qorday Russell attempts a pass to a fellow Blue Devils football player during the team's loss to the Hancock Hawks Friday night. Photo by Jeremy Pittari

Pearl River Central’s Blue Devils fell to the Hancock County Hawks Friday night in a shut out win by the visiting team.

In the Blue Devils first home game of the season, PRC fell to Hancock County 35-0.

The first score of the game took place with only 5:37 left to play in the first quarter when Dylan Moran completed a pass to Neil Acker from the Blue Devils’ 28 yard line.

Hancock’s kicker, Finn Cowan, completed all but one of his PAT attempts. His first successful attempt put the score at 7-0.

The Blue Devils had the ball for one play after Hancock’s first score before fumbling the ball to Hancock. The next play was another scoring play for Hancock when Destin Coleman carried the ball from their own 39 yard line for a big score. With 4:56 left to play, the Hawks now led 13-0 after Cowan missed his PAT attempt.

In the second quarter, the Hawks expanded that lead when a snap fumble by the Devils gave Hancock the ball within the five yard line. Mason Cranmer took advantage of the prime field position and reached pay dirt with 5:16 left to play before halftime. A two point conversion pass play involving Moran completing a pass to Tanner Ladner put the score at 21-0.

The Hawks scored again after halftime in the third when Coleman reached pay dirt from within the five yard line.

Cowan’s successful PAT attempt put the score at 28-0 with 8:35 left in the third quarter.

The final touchdown of the game came toward the end of the third quarter with 4:01 left on the clock when Moran completed a pass from the 11 yard line to Ladner. Cowan’s PAT put the final touches on the ending 35-0 score.

The Blue Devils will travel to Poplarville next week to face the Hornets. Kickoff is set for 7:30 p.m.