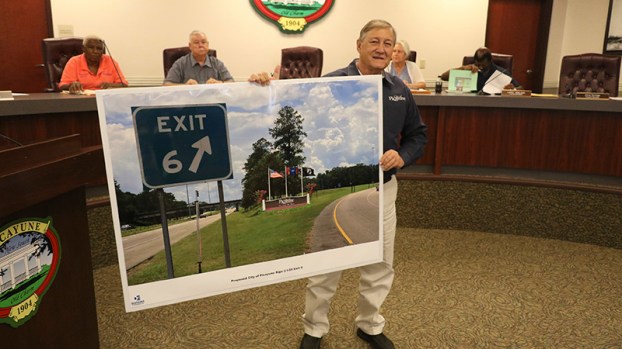 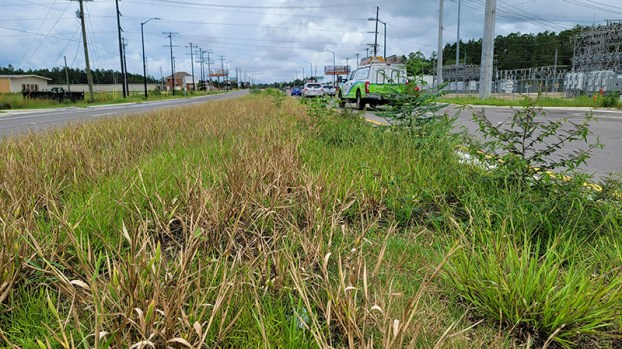 Exit ramps along Interstate 59 in the city limits of Picayune will get some beautification work, but the medians along Highway 11 where the widening project was recently completed are overgrown.

Mayor Jim Luke stood before the audience during the Aug. 16 meeting of the City Council to show a graphic of what signs at those exit ramps will look like. The graphic essentially mimics the brick sign seen when entering the city from Highway 43 South.

Now that the land at those exits has been turned over to the city by the Mississippi Department of Transportation, the city will be responsible for the upkeep of those areas. MDOT made efforts to remove a number of the trees at those exits as part of the agreement, allowing motorists to better see the businesses in those areas from the Interstate.

To help with the construction of those signs, Glenn Neal, who is working to open a new industry in the city called Americlean, pledged to donate the flag poles that will be part of those signs, Luke said. Additionally, Robert and Sherri Thigpen who own Paul’s Pastry and the building in which the business resides, Top of the Hill, have also indicated their intention to donate, Luke said.

Public Works Director Eric Morris said the plan for those exits will be to do the work little by little as time allows. That includes cleaning them up, which has come a long way with MDOT’s help. Any other work will be conducted as the budget allows and donations are brought in.

Morris added that the exits will also feature nods to the Picayune Maroon Tide and their accomplishments.

While the work will ensure those areas don’t become wooded again, Morris said some decorative shrubs and bushes will be planted in key spots.

In other business, Morris said he has spoken with MDOT about the current state of the overgrown grass in the medians along Highway 11, and they are aware of the numerous complaints being lodged.

Work by his crews have replaced two gas meters, one of which was at Pizza Hut, one of the city’s largest customers of natural gas.

A water line was also installed at Friendship Park toward the soccer field and three miles of drainage features have been sprayed.

Work is also planned for the city’s new dog park, the Barking Lot, to install several features intended for pets to play on or under while visiting the park. That park is located near Mildred Mitchell Park on Sycamore Road.

Planning and Development Director Diane Miller said the new owners of what was Don’s Seafood have applied for and received their beer and liquor licenses, and the plan is for the new business to open in early September.