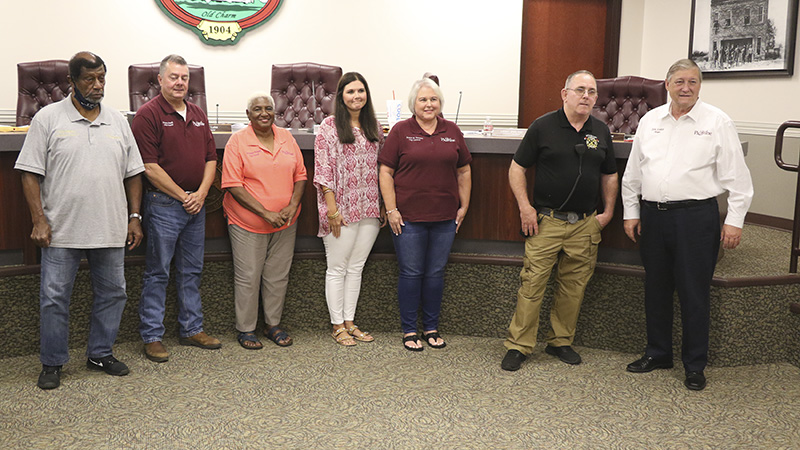 Battalion Chief Chris Banks with the Picayune Fire Department was recognized for his 28 years of service to the city during a recent City Council meeting.

Fire Chief Pat Weaver said Banks officially retired on July 17, but he attended the Aug. 2, meeting of the Council where its members approved a motion to allow Banks to purchase his badge and helmet for $1.

Prior to that motion being approved, Weaver took a moment to recognize Banks for his years of dedication to the city. Weaver said Banks has not only served with the Picayune Fire Department for decades, he was also the Fire Chief for the Carriere Volunteer Fire Department. Banks also retired from the volunteer position.

Weaver said Banks has served the city well over the years, at one point becoming trapped in a Catholic Church while fighting a fire that broke out in the building. After escaping the burning building, Banks reportedly considered retiring, but continued to serve the city and county as a firefighter for many years.

“You won’t find a more dedicated person to the fire service,” Weaver said.

During the meeting, Public Works Director Eric Morris gave an update concerning work completed within his department. He said two drainage repairs were conducted, one on Quince Street and Stevens Street that involved repairing a water/sewer lines located near large storm drains. The storm drains were experiencing blockage that needed to be addressed. He said both repairs involved hundreds of man hours of work and involved lowering the catch basins to ensure the problems would not reoccur. Both catch basins were also modified to ensure debris did not get caught under the water/sewer lines.

Additionally, the sign for the city’s first dog park have been ordered. The signs will officially name the area the Barking Lot when received and installed.

Other work completed involved trimming branches above Cooper Road at the request of city residents who were having trouble towing camper trailers down the road.

The company TLC has everything needed to move forward with the due diligence phase, while AmeriClean is waiting on the state to complete their side of the process.

She also informed the Council that American Rescue Plan Act funds have been distributed to the state for local waste water and water projects through the Mississippi Department of Environmental Quality. Ward suggested the Council work with the Board of Supervisors to submit proposed projects to max out the benefit from this round of grant funds. She said since this is one time grant funding, it’s a great opportunity to fund some transformational projects that will benefit the community.

The Council also approved a motion to allow the Picayune School District to close Laurel Street and Fifth Avenue during school hours and install gates, fencing, and a guard shack that will be manned to control traffic flow. The motion also included widening the street by 13 feet to accommodate the shack. Superintendent Dean Shaw said the effort is being taken to ensure the campus is secured and the school district will pay for all incurred expenses, including widening the road.

Also during the meeting, Nickie Smith with the Rotary Club of Picayune gave attendees a brief description of the club and why people should consider joining. With the motto “Service Above Self,” the club is community minded and as such conducts several efforts through the year. Tuesday, the club held a blood drive, and each year members of the club go to every third grade class in the area, including those at private schools, to hand out dictionaries. The club meets on Tuesdays at noon at the Millbrook Country Club Squirrels Nest.