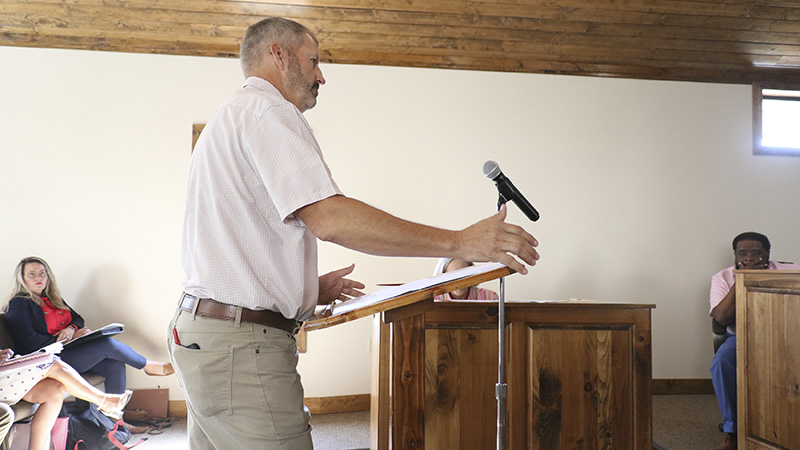 Les Dungan with Dungan Engineering provides the Pearl River County Board of Supervisors with an update concerning road projects and efforts to repair the weir along the Pearl River during Monday's meeting. Photo by Jeremy Pittari

Pearl River County’s Board of Supervisors heard an update concerning road construction and efforts to repair the weir along the Pearl River during Monday’s meeting.

Work on Shorty Burgess Road to replace an aging bridge will begin in the next week or two, said Les Dungan with Dungan Engineering. That bridge was closed in July of 2021 after it was determined the wood pilings underneath the structure were failing.

He said the county can move forward with that project, and start the process to replace a bridge on County Farm Road, which will need right of way acquisition.

In relation to countywide paving efforts, Dungan said phase two of the project is about 33 percent complete, but 57 percent of the timeline has been exhausted. When asked by supervisors if the difference between the two stats is concerning, Dungan said he anticipates the timeline and percentage completion rates to line up soon.

An update on efforts to repair the weir along the Pearl River near Walkiah Bluff was also provided during the meeting. Dungan said a productive meeting was held with the Corps of Engineers two weeks ago. He said the environmental consultant hired by the county suggested holding a public hearing on the matter to ensure all bases are covered, even though holding that meeting is not required. County Administrator Adrain Lumpkin elaborated by explaining the nationwide permit needed to conduct the repairs does not have that stipulation.

However, it appears the Board will move forward with holding a public hearing, and set a date of Aug. 17 to hold that hearing.

Another aspect of repairing the weir involves utilizing a survey crew to determine where the county would have legal access to conduct construction as part of the project. Dungan said that is needed because property lines appear to be unclearly defined in that area.

The Board also had a discussion concerning an increasing presence of homeless people sleeping in parks. Lumpkin said the problem is that since there is no homeless shelter in the county, there is no where to send them. Sheriff David Allison said his department typically gets involved when a homeless person is reported to be on private property, but his deputies can only ask them to move along unless they commit a crime, at which point they would be arrested.

The Board suggested creating signs to state that the parks are closed during the night.