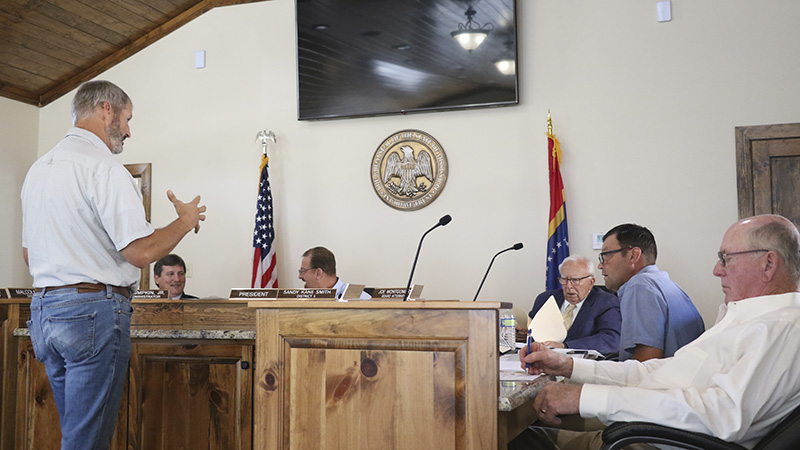 At left Les Dungan speaks to the Pearl River County Board of Supervisors to provide an update on the second phase of the county-wide paving project. Photo by Jeremy Pittari

Paving work as part of phase two of Pearl River County Board of Supervisor’s county wide paving project is advancing.

Les Dungan with Dungan Engineering gave the Pearl River County Board of Supervisors an update last week, saying that the actual progress in the project is at about 25 percent, with about 8.7 miles of roadway completed by the contractor as of the June 22 meeting of the Board and about 5.3 miles completed by county crews.

Dungan said state aid projects are also on the table, with 27 total miles of road in this count classified in that category. Dungan said the focus of that project will be to repair the most damaged roads.

When the bids were opened, only one was submitted by Huey Stockstill Inc., at a price of $1.45 million. Dungan said the current market and fuel prices led to the bid coming in higher than the estimate he made a year ago of $900,000. In spite of the significant rise in pricing, Dugan said he was able to get justification with the state to award the bid. Part of the reason for that justification  was due to the state’s engineers recently hearing from Lamar County, who also reported unit prices for asphalt and other supplies had risen and those prices reflected what Huey Stockstill turned in on the bid for the local project.

After discussion of the bid, the Board of Supervisors approved a motion to award the bid to Huey Stockstill Inc.

In other business, County Administrator Adrain Lumpkin said efforts to purchase new vehicles for county services, such as a brush truck for the Steephollow Volunteer Fire Department, are still difficult. The ones that can be found for purchase are priced between $55,000 to $59,000. He suggested the Board wait until the first meeting in July to seek out a new truck since a new law will go into effect in July increasing the minimum needed to seek bids to $75,000.

Lumpkin also informed the Board that tax rolls will no longer be printed out in 25 books and placed for public review on a table in the Board room. Instead, the tax rolls will be available in digital form at the tax office. He said the decision was made to save on expenses with printing, along with the fact that if anyone had questions about their assessment, they would have to go to the tax office anyway.

The Board also approved a motion to approve a tax abatement request from Heritage Plastics for planned improvements. Pearl River County Economic Development Director Lindsay Ward said the company plans to invest about $13.7 million over a three year period that will result in eight new jobs being created in total that will add another $250,000 to the company’s payroll.

Ward added that the business also invested $3.1 million in a rail spur and another $6.1 million in new equipment.

The Board approved Heritage Plastic’s tax abatement request for 10 years.

Tax abatements only apply to the entity approving the request, so Ward said she is working with Picayune’s City Council to have that body approve a similar request. Tax abatements do not apply to taxes provided to school districts.

“I’m excited to have an existing business in the county for that long and to want to continue to help grow our community,” Ward said.