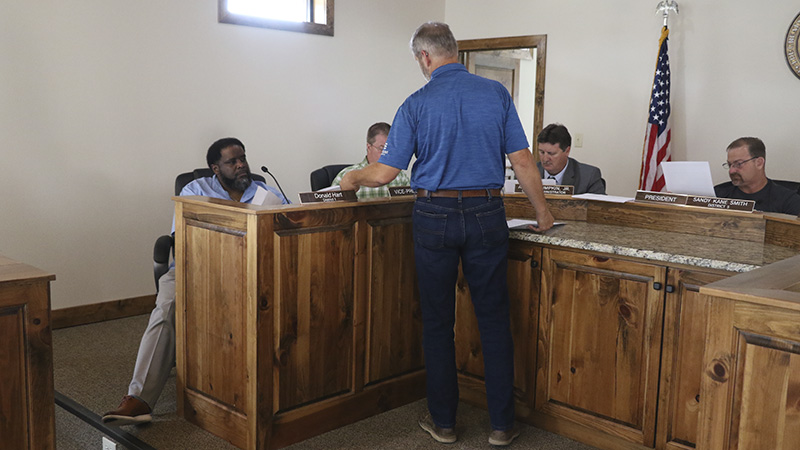 Les Dungan provides members of the Pearl River County Board of Supervisors with a list of roads that are part of the county-wide paving project. Photo by Jeremy Pittari

Paving project progress and the replacement of a bridge that has been closed for two years on Shorty Burgess Road were discussed by the Board of Supervisors.

Dungan said about another mile is of road planned for DBST is ready, and 3.4 miles of overlay work has been issued to the contractors.

In other repair matters, Dungan said the county is now ready to award the bid for the replacement of the bridge on Shorty Burgess Road. While bids were received in May, Dungan said he has been holding on to it due to an Emergency Road and Bridge Repair grant application. Now that the county has been approved for that grant, there are two funding sources for the project. Under Dungan’s suggestion, the Board awarded the project to Fred Fayard, who bid $346,925.

He added that even if the Board had awarded the bid back in May, the project still wouldn’t move forward until now due to the fact components needed for the project have been under construction since May.

Dungan also updated the Board about efforts to repair the weir on the Pearl River near Walkiah Bluff. An environmental consultant has been hired to help with the permitting process. Dungan also said a meeting with the Corps of Engineers was held this month and he feels the chances of getting the required permits are good.