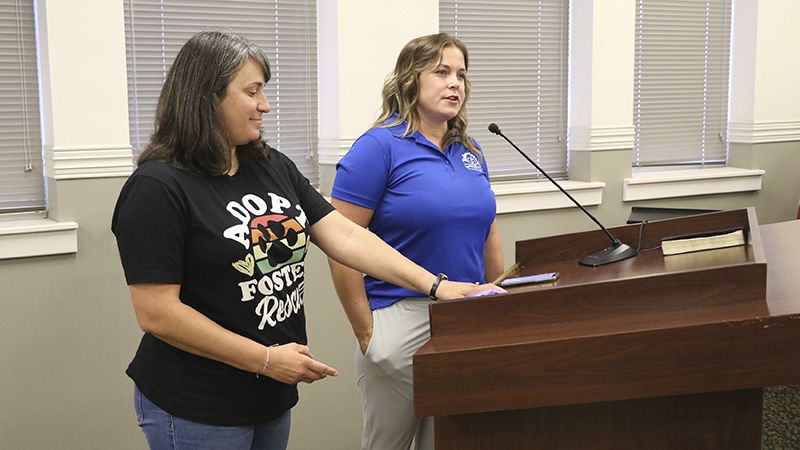 Representatives with the Pearl River County SPCA spoke to members of the Picayune City Council during Tuesday’s meeting to update them about the local animal shelter’s operations.

PRC SPCA Treasurer Lauren Fitts said the shelter was started back in 1998 when an organization known as Friends of the PRC SPCA assumed operation of the animal shelter from the city of Picayune.

Today, the shelter employs about 19 people with a minimum starting wage at $10 per hour. Some duties are taken care of by a dozen volunteers.

Some of the programs offered by the shelter include a low cost spay and neuter program, a biannual wellness clinic and a twice monthly food bank.

After the Picayune Fire Department constructed a new station at the end of Goodyear Boulevard, the old station on Palestine Road next door to the shelter was turned over to the shelter. Fitts said staff and volunteers are still in the process of renovating that facility, now called Hope Station.

When complete, that facility will act as a clinic where a veterinarian will care for animals. The truck bays of the old fire station are currently used to hold monthly yard sales that help fund operations at the shelter.

Shelter Manager Elizabeth Treadaway said the shelter’s intake diversion totals about 3,500 animals annually, which includes a combination of strays brought to the shelter by the public and animal control along with owner surrenders.

On average over the past five years, 30 to 40 percent of the animals brought to the shelter are strays, Treadaway said. While the shelter has a contract with the county and city to house strays, only 8 percent of the shelter’s total finances come from the city and county. The rest is covered by donations and grants.

The goal of the shelter’s staff is to reach a no kill status by 2025, meaning less than 10 percent of the animals are euthanized, while 90 percent or more are adopted or released alive, which can include transfers to other shelters with low populations.

Typically the shelter houses about 150 animals at the shelter, but with kitten season in full swing, the are about 250 being housed there, with another 150 being cared for in foster homes.

Farmer said such meetings are to be posted as per the state law. One such meeting was held on June 22, at City Hall.

On the agenda was one item, “executive session, personnel matter.”

Farmer said that meeting opened on that date at 5 p.m. and the Council made a motion to close the meeting to determine the need for an executive session. Once the meeting was open back up, no action was taken on the matter discussed, Farmer said.